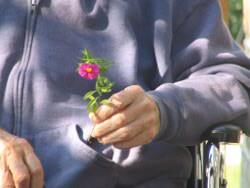 we die, we die to the Lord; so then, whether we live or whether we die, we are the Lord’s’ (Rom. 14:7-8). Dying to the Lord means experiencing one’s death as the supreme act of obedience to the Father (Phil 2:8), being ready to meet death at the ‘hour’ willed and chosen by him (cf. Jn. 13:1), which can only mean when one’s earthly pilgrimage is completed. Living to the Lord also means recognizing that suffering, while still and evil and trial in itself, can always become a source of good.  It becomes such if it is experienced for love and with love through sharing, by God’s gracious gift and one’s own personal and free choice, in the suffering of Christ Crucified.” Evangelium Vitae n. 67.

These are a direct attack on the dignity of the human person, attacking the vulnerable elderly and sick. Pope John Paul II points out in Gospel of Life that the ideal of the Messianic age is presented as a time when “no more shall there by . . . an old man who does not fill out his days.” Is. 65:20; Evangelium Vitae n. 46. To this end, the “the pastoral activity of the Church must help everyone to discover and to make good use of the role of the elderly within the civil and ecclesial community, in particular within the family.” Familiaris Consortio n. 27.

They put the will of man before that of God, the absolute Master of whether we live or die and He in whom “we live and move and have our being.” Acts 17:28; Evangelium Vitae n. 47. In addition, these acts disregard the value of suffering, which is part of the human condition. Declaration on Euthanasia III. “Suffering, especially suffering during the last moments of life, has a special place in God’s saving plan; it is in fact a sharing in Christ’s passion.” Declaration on Euthanasia III. To end one’s life or the life of another is “false mercy,” a “disturbing ‘perversion’ of mercy.” Evangelium Vitae n. 66.

Finally, these acts deny families opportunities for grace. “Charity finds the most appropriate means for enabling the elderly, especially those who can no longer look after themselves, and the terminally ill to enjoy genuinely humane assistance and to receive an adequate response to their needs, particularly their anxiety and their loneliness,” and families are indispensable to this end. Evangelium Vitae n. 88.

“I confirm that euthanasia is a grave violation of the law of God, since it is the deliberate and morally unacceptable killing of a human person. This doctrine is based upon the natural law and upon the written word of God, is transmitted by the Church’s Tradition and taught by the ordinary and universal Magisterium.” Evangelium Vitae n. 65.

1994, Oregon passes Death with Dignity Act, legalizing assisted suicide. The law went into effect in 1997. Since then 401 deaths have been reported under the statute.

2009, On 12/31/09, the Montana Supreme Court ruled that rights granted under the state’s living will law, “The Rights of the Terminally Ill Act,” form the basis for permitting physician “aid-in-dying” (doctor-prescribed suicide). The Court said that doctors can use the patient’s consent as a defense if charged with assisted suicide for writing a prescription for death.