Immediately after the nine-day novena to Our Lady of Guadalupe (December 3rd through 11th), Hispanic Catholics begin another nine-day novena in preparation for the feast of Christmas 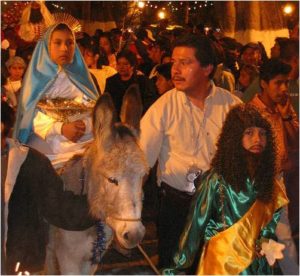 This novena may be celebrated either in church on in individual homes and is commonly called Las Posadas, although the celebration of the Posadas is only one part of the Novena, which–like many popular Hispanic devotions–is actually built around the Rosary with various meditations and reflections, to which is added a simple re-enactment of the Holy Family’s search for lodging (or “Posada”) en Bethlehem.

In a warmer climates, this search takes the form of an outdoor procession with children dressed as Our Lady and St. Joseph (called in Spanish the “Santos Peregrinos”). Sometimes the peregrinos are two small statues carried by children in the procession.

There are traditional songs for the Posada, which are very easily learned.

Organizing the XV Años Mass – Who goes where and why does it take so many couples?

In celebrating the XV años Mass, there are a number of things to keep in mind. First of all, this is an extraordinary opportunity to reach out to the uncatechized members of your parish.

Assume that there will be damas and chambelanes who have not yet received their sacraments. They may not even know how to behave in church, but a smile can put them at ease and making them feel welcome may be the first step towards inviting them to receive their sacraments.

Secondly, no matter how simple you would like to keep the ceremony, it will likely end up in a lavish display–the poorer the family, the more costly the gowns! Remember though that a good deal of the cost of the ceremony will be shared by the various padrinos, e.g. the padrinos of the gown and the padrinos of the limousine. There are two principal groups involved in the ceremony. First the damas and chambelanes. They will consist of the quinceañera’s sisters, cousins and friends. There may be as many as fifteen couples and they come first in the traditional entrance preocession. Let the damas take the first pew on your right and the chambelanes the first on the left. The second group are de padrinos. In general they represent the parents’ generation. They enter next, taking the second pew on the left and right. The most important godparents are the padrinos de velacion and they come in at the end of all the other padrinos. Their place in the sanctuary is a little behind and to the right and left of the quinceañera. In the entrace rite she comes in accompanied by her parents and perhaps a flower girl or two. There should be a kneeler centered in front of the altar for the quinceañera. Her parents stay behind the padrinos de velacion.

All but the simplest celebrations include padrinos of the corona, the anillo, libro y rosario, cojines, pulsera, arêtes and the medalla. There may also be padrinos de la Biblia and a madrina del ramo. The honor of presenting the floral bouquet is sometimes divided between two people – the dama de honor, who presents the bouquet of fresh flowers let at the Virgin’s shire, and the madrina del ramo permanente who presents a large bouquet of silk flowers. If there is no madrina del ramo permanente then the dama de honor can present the live bouquet and the madrina de velacion the permanent one.

Note that the chambelán de honor does not accompany the dama de honor. His sole function is to escort the quinceañera down the aisle after mass. The dama de honor follows behind, either unescorted or with another chambelán.