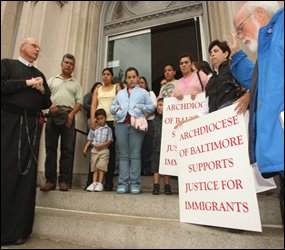 We are members of the Archdiocese of Baltimore Immigration Coalition.  We have been recently formed as a part of the vision of Archbishop O’Brien.  We are from across the Archdiocese from the mountains of Western Maryland to the streets of Baltimore to the shores of the Chesapeake Bay.  Baltimore has always been a community of immigrants in its neighborhoods, synagogues, churches, and more recently its mosques.

In the early 20th Century when immigrants came to the Port of Baltimore there are stories about the priests who would meet the ships and escort the immigrants from their countries to their own church communities. These immigrants were from Italy, Poland, Lithuania, Germany, Ireland, and other European countries.

In 2009 this Archdiocesan Coalition is formed to address the needs of immigrants coming to Baltimore in the 21st Century.  The immigrants today are coming from African Nations, South and Central America, Caribbean Countries, and Countries in Asia.

The purpose of this coalition is:

We are standing here today in solidarity with the immigrant community in Baltimore and throughout this nation.  We do not stand here as a political party but as a people of faith.

We commit ourselves to conversation, prayer, and action that will help to bring about just and lasting dignity for immigrants in Baltimore and across the United States of America.