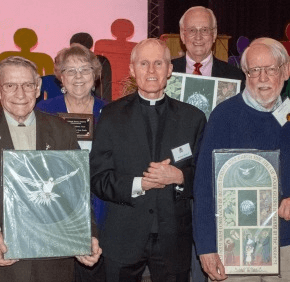 Bishop Mark E. Brennan
“My long-term goal,” Bishop Mark E. Brennan said, “is that the Hispanic Catholics here and around the country become a leaven in the dough of our culture. … Hispanic immigrants bring things to the table worth having (such as) a focus on family-life. They enrich our lives.”
Six weeks after he was ordained an auxiliary for the Archdiocese of Baltimore, Bishop Brennan led one of the more than a dozen workshops during the 38th annual Archdiocesan Social Ministry Convocation March 4. More than 300 attended, including some 30 Latino parishioners, all newcomers to the area, who took a seat in a classroom at The Seton Keough High School to hear the bishop address three of the many branches of social justice: abortion, racism and immigration.
Regarding the latter, Bishop Brennan reminded his audience of the church’s teaching.
“People and families have the right to live in peace and security in their own places,” he said, “but if they can’t stay for reasons such as lack of work or food or because of violence, they have a right to go to another place where they can live in peace.”

A history major at Brown University in Providence, R.I., Bishop Brennan noted that national borders change over time.
“Political borders in reality are artificial,” he told attendees. “That is not to say borders aren’t important. … Governments have the right to protect and look out for the well-being of citizens.”
A young woman sought Bishop Brennan’s insight on how to unify the many branches of social justice when she often sees divisions.
“Keep reaffirming that the foundation (of Catholic social teaching) is the respect for every human being,” Bishop Brennan said. “Then you see (social justice) encompasses concern for the unborn child, the elderly and the immigrant.”
A question-and-answer session is just one step in Bishop Brennan’s outreach to Spanish-speaking Catholics in the archdiocese. Bishop Brennan, who says his Spanish is not perfect but good enough to defend himself, will focus on getting to know members of the community, visiting parishes with established Hispanic ministries and identifying where there is still a need.
The day began with a prayer walk followed by a keynote address from Reverend Andrew Foster Connors, senior pastor of Brown Memorial Presbyterian Church and co-chairman of Baltimoreans United in Leadership Development (BUILD). He spoke on the convocation’s theme, “Racism and Economic Justice.”
After morning and afternoon workshops, the program concluded with a prayer service and award ceremony.
Joan and Ryan Sattler, of St. Matthew in Northwood, received The Doris Johnson Award for their long history of service and advocacy work, in particular for recent endeavors addressing discrimination and prejudice. They helped form the parish’s LEAD LGBTQ ministry and a Racial Justice Circle, and most recently created the Latino Racial Justice Circle.
Both emphasize their work is a community effort.

“There would be no reason to have an award if we weren’t doing this as a community of justice workers, of people who are passionate about these topics,” Joan said.

Kit Cross is a freelance writer and photographer for the Catholic Review.