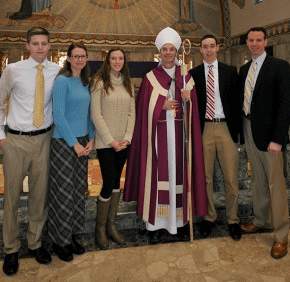 By Paul McMullen
pmcmullen@CatholicReview.org
Twitter: @ReviewMcMullen
There are no athletic parents more dedicated than swim parents, who have time to take a substantial chunk out of “War and Peace” during weekend meets that stretch seemingly from dawn to dusk.
Stacey Verby and Hallie Riedel, however, found themselves discussing another good book during down time supporting their children and the Monocacy Aquatic Club.
Riedel is the assistant editor for meditations for The Word Among Us, a Frederick-based monthly Catholic magazine with more than a half-million subscribers around the world. She found Verby and her husband, Russell, in the midst of a spiritual crisis.
“During those long swim meets, Hallie and I would talk about faith,” Verby said. “I said to myself, ‘She really knows her faith.’ Hallie invited us to a teaching Mass in January 2016, and it was fabulous.
“God seemed to put a lot of obstacles in our path, but it’s been the best, amazing journey.”
It brought the Verbys and their 18-year-old triplets – James, Madeleine and Timothy – to the Basilica of the National Shrine of St. Elizabeth Ann Seton in Emmitsburg March 5, for the Combined Rite of Election and the Call to Continuing Conversion.
Bishop Adam J. Parker presided at the Seton Shrine, one of three locations for a liturgy that included 636 candidates and catechumens (see chart below). Archbishop William E. Lori presided at the Cathedral of Mary Our Queen in Homeland, and Bishop Mark E. Brennan at St. John Neumann in Annapolis.

Sara Travlos/CR graphic
Catechumens are those who have not been baptized in another Trinitarian faith tradition. The Verbys are among the candidates who will be confirmed and come into full communion with the Catholic Church April 15, during the Easter Vigil.
The Verbys are already active parishioners of St. Joseph-on-Carrollton Manor in Buckeystown, where Stacey is a facilitator of a Bible study group that includes Riedel.
“She’s inquisitive, and has a love for the truth,” Riedel said. “A lot of great saints, like St. John Neumann, came looking for the truth. Stacey, and her whole family, they were just trying to find the truth.”
Stacey and Russell Verby met while members of the swim team at the University of Maine, and were married in a congregational church in the resort town of Bar Harbor. In 1995 they settled in the Washington, D.C., area, where he continues to work both as an attorney for the Department of Justice and a Naval Reserve officer.
Over two decades, their ritual ranged from Evangelical Lutheran to Pentecostal churches.
“We also tried community-run, non-denominational churches,” Stacey said. “There were glimmers of light in each place, but we were restless, and felt something was wrong with us. We even looked into a Messianic Jewish congregation. We did a lot of reading, and a lot of searching.”

Eighteen-year-old James Verby gets a congratulatory hug from his grandmother, Mary Jane Seabrease, during the Rite of Election in Emmitsburg March 5. (Denise Barnes Warfield/Special to the Review)

Something in Brant Pitre’s “Jesus and the Jewish Roots of the Eucharist” clicked, as did a reading of the Catechism of the Catholic Church.
“After reading that,” Stacey said, “I said, ‘This is the church.’ I went to Russell and said, ‘We’re Catholic.’ He said, ‘I’ve been waiting for you to say that.’ We’ve had a lot of heartbreak over the last seven, eight years, but it is so Catholic, the way the Holy Spirit was revealed. …”
In addition to Riedel, Verby said her family found a “most gentle, welcoming soul” in their pastor, Father Lawrence K. Frazier, and another guide in Deacon Gregory Rausch, who recommended Thomas Merton’s “The Seven Storey Mountain.”
Russell Verby had experienced the universal church when work took him to the Republic of the Congo, where he could always rely on Baltimore-based Catholic Relief Services for a meal.
Now Stacey is comforted by the fact that their children will experience the same after they graduate from Oakdale High School in Lake Linganore and head to college; James to The Catholic University of America in Washington, Madeleine to Shippensburg (Pa.) University and Timothy to the U.S. Naval Academy in Annapolis.
“I’m so happy for our children,” Stacey said. “Wherever they go, there’s going to be a Catholic church.”

To view more photos from the Rite of Election in Emmitsburg, visit our Smugmug page here.

The John Carroll School mourns the loss of a good friend, smiling presence