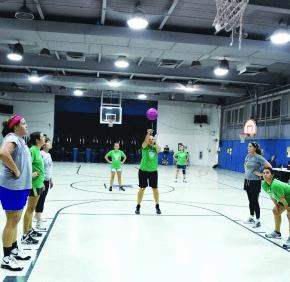 TOWSON – Mount St. Joseph won the Baltimore Catholic League tournament for the seventh time in 14 years, primarily because senior Darryl Morsell – and no one else wearing a Gael uniform, for that matter – had experienced that thrill.

The Most Outstanding Player in the 46th annual BCL tournament, Morsell had 14 points and was a force inside at both ends, as top-seeded Mount St. Joseph ran away from Our Lady of Mount Carmel midway through the third quarter for a 54-44 victory March 5 at Goucher College.

Morsell and fellow seniors Nigel Jackson, who missed the game with an injury, and Jaden Robinson were freshmen in 2014, when coach Pat Clatchey’s Gaels last won the tournament. The drought was most painful a year ago, when they lost the championship game to John Carroll at the buzzer.

The Mount St. Joseph basketball team celebrates its 54-44 victory over Our Lady of Mount Carmel March 5 at Goucher College in the championship game of the 46th annual Baltimore Catholic League tournament. (Doug Kapustin/Special to the Review)

“We talked about it before, the seniors hadn’t won the BCL,” Clatchey said. “They had to find a way. We learned last year, every possession is important.”

That memory was behind the sense of urgency Mount St. Joseph applied when junior center Jalen Smith, the BCL Player of the Year, sat down with his third foul with 5:26 to play in the third quarter and the Gaels clinging to a 28-25 lead.

Minus Smith, Mount St. Joseph grabbed every loose ball, shared it and went on a decisive 13-1 run. It included the 6-foot-5-inch Morsell posting up, drawing the defense and throwing a cross-court pass to set up a three-pointer by Kendall McMillan, then converting putbacks on successive possessions in the final 30 seconds of the period.

The first came on his third try at the basket, the second with Morsell falling down, a shot every bit as spectacular as the three-pointer that Melo Trimble hit the day before to lift Maryland – where Morsell has accepted a scholarship – to a win over Michigan State.

“We stuck together,” Morsell said, in an understatement.

Morsell was joined on the all-tournament team by Smith, who finished with nine points, and junior James Bishop, who had 14. Robinson added nine points, as the Gaels became the third school with seven BCL titles, joining St. Frances Academy and Calvert Hall.

From left, Kendall McMillan, Darryl Morsell and Tyree Myers celebrate one of the plays
that lifted the Mount St. Joseph basketball team to a 54-44 victory over Our Lady of Mount Carmel March 5 at Goucher College in the championship game of the 46th annual Baltimore Catholic League tournament. (Doug Kapustin/Special to the Review)

Terry Nolan Jr., a senior guard who is headed to the University of Tennessee-Chattanooga, made the all-tournament team for Mount Carmel. The Cougars were visibly worn down, as they needed overtime to survive Calvert Hall in the quarterfinals, and were playing on 15 hours rest after beating St. Maria Goretti in Saturday night’s second semifinal.

“The guys probably got a little tired, but they’ve got to step up anyway, that’s no excuse,” said Hakim Hibbert, the Mount Carmel coach. “He (Morsell) controlled the game in the second half. There’s a reason why he’s going to Maryland.”

The victory came a week the Gaels won the Maryland Interscholastic Athletic Association A Conference tournament, which gave the school what is believed to be an unprecedented four A Conference titles in the winter season. Mount St. Joseph had already won championships in ice hockey, indoor track and field, and wrestling.