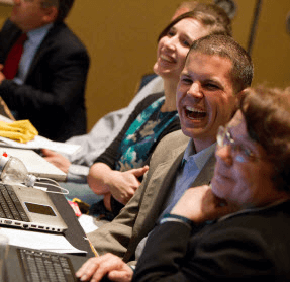 BALTIMORE – A group of U.S. bishops and Catholic bloggers discussed – and tweeted about – how to use social media to spread the Gospel message during a Nov. 11 session prior to the start of the U.S. bishops’ annual general assembly in Baltimore.

In the nearly three-hour session, the group of two dozen bishops and even more bloggers talked about the challenges in keeping up with the all-pervasive social media but also acknowledged the absolute necessity of doing so in order to reach people and connect them more deeply with their faith – or put simply: to evangelize.

In question-and-answer sessions, a panel discussion and in small groups, the bloggers repeatedly urged the bishops to use social media tools at their disposal such as blogs and Twitter or Facebook accounts as a means to communicate a living faith in the modern world.

“(Archbishop) Fulton Sheen would give his right arm to have the tools we have today,” said Brandon Vogt, a 26-year old Catholic blogger and author of the 2011 book “The Church and New Media: Blogging Converts, Online Activists and Bishops Who Tweet.” Archbishop Sheen, who was declared venerable this year, was known for his preaching on television and radio in the 1950s.

Rocco Palmo, author of the popular Catholic blog “Whispers in the Loggia,” urged bishops to recognize that they have something unique to bring to the broad social media table.

He gave the example of Bishop Alexander K. Sample of Marquette, Mich., who kicked off the Year of Faith by traveling more than 1,000 miles across Michigan’s Upper Peninsula to visit parishes and tweeted about the trip along the way.

“That’s something you bring that can’t be replicated,” Palmo said, noting that people can relate to bishops when they share their experience and also feel close to them. “Your job as guarantors of the faith is to make sure the message has integrity and resonates with people.”

If the bishops had any doubt about the number of people, Catholics in particular, who use social media, a new study by Georgetown University’s Center for Applied Research in the Apostolate, confirmed that there is indeed a big audience out there, and that audience wants material that is relevant and also entertaining.

Mark Gray, director of Catholic polls and a research associate at CARA, gave the bishops and bloggers highlights of the study, “Catholic New Media Use in the United States, 2012” commissioned by the U.S. Conference of Catholic Bishops’ Department of Communications.

The survey, of 1,047 Catholics from Sept. 10-18, showed that 62 percent of adult U.S. Catholics, representing an estimated 36.2 million people, have a profile on Facebook; 58 percent of Catholics age 30 and under share content such as pictures, articles and comments at least once a week on social media; and nearly a third of all surveyed said they would like their pastors and bishops to blog.

An immediate takeaway from the survey was that the sheer number of Catholics online cannot be ignored.

Bishop John C. Wester of Salt Lake City, chairman of the USCCB Committee on Communications, said the CARA report “suggests many opportunities for the church to engage with those who live on the ‘digital continent,’“ described by Pope Benedict XVI and urged bishops and Catholic laity to approach this online world as missionaries.

The bishop read a letter to the session’s participants from Archbishop Claudio Maria Celli, president of the Pontifical Council for Social Communications, which similarly described the online mission field.

“In this context, the role of the laity becomes ever more central,” he said, noting that the “voices of the many Catholics who are present in blogs, social networks and other digital forums are reaching people who might not otherwise encounter the message of Jesus.”

Some of the bishops at the meeting expressed a hesitancy to jump into the online social media world, noting that it could take a lot of time and that there can be a lack of civility in many online discussions and comments.

In a small group discussion, one bishop said he was overwhelmed by the concept of tweeting even a few times a day.

Sister Anne Flanagan, a Sister of St. Paul who writes “Nun Blog,” assured him that it wasn’t that hard, noting that just during the group discussion she had already tweeted 10 times. The sister, who has more than 5,000 followers on Twitter, said she sees the value of making connections with people and drawing people into the church.

Other bloggers emphasized that the online world is a key place to reach young people.

Archbishop Joseph E. Kurtz of Louisville, Ky., took that idea a step further by encouraging young bloggers to help the church in this work, suggesting that they call their pastor or bishop and offer to help.

Bloggers in turn advised bishops to talk about the faith – in quick and entertaining ways – by linking faith to current events or even discussing movies in blogs or video reflections.

The bloggers, many of whom live tweeted the session, not only showed how it can be done, but highlighted its urgency.

Mary DeTurris Poust, former contributor to Our Sunday Visitor’s “Daily Take” blog and the author of her own blog, “Not Strictly Spiritual,” put it this way: “Facebook is the new parish hall” where people meet and look for spiritual guidance and connections.

“If they don’t find it in our virtual walls, they will find it elsewhere,” she said.