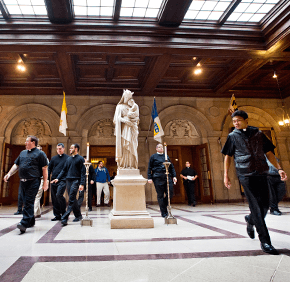 Have you ever driven west on Northern Parkway in Baltimore and wondered what goes on inside the imposing structure that resembles a French palace, or considered what goes into the formation of a Catholic priest or a Protestant minister?

The Catholic Review went searching for those answers last month, when Staff Writer Elizabeth Lowe and Staff Photographer Tom McCarthy Jr. spent a day at St. Mary’s Seminary and University in Roland Park, and its Ecumenical Institute of Theology, where 80 seminarians and nearly twice as many theology students learn about faith and how to share it throughout the Archdiocese of Baltimore and the world.

Sunshine streams through ornate stained-glass windows and into the vast Chapel of the Presentation of the Blessed Virgin Mary.

Clutching Bibles, seminarians close their eyes during morning prayer. This will be repeated twice before the sun sets, as praying together is essential to the formation of men in the midst of years of discernment and study before committing and qualifying for the priesthood.

The Catholic Review spent Oct. 23 at St. Mary’s, shadowing a seminarian, observing priest instructors and talking to a non-Catholic in its Ecumenical Institute.

The quest for eternal truths, it seems, requires lengthy days.

St. Mary’s main entrance evokes the Palace of Versailles, near Paris. With arched doors and windows, flat roofs and a symmetrical design, the grand structures share a heritage.

While visitors can get lost in its 300,000 square feet, its core is the chapel, grander than some cathedrals. A larger-than-life sized crucifix is the focal point of this breathtaking worship space.

Morning prayer concludes at 8:15 a.m. Deacon Hamilton Okeke, a fourth-year theology seminarian who will be ordained a priest for the archdiocese in June 2013, heads to the cafeteria for a glass of orange juice.

His first class today is Theology of the Eucharist, taught by Franciscan Father Daniel P. Grigassy, director of liturgy.

Classrooms have huge windows and at least one crucifix, some two. Classes typically begin and end with prayer, such as the Hail Mary.

Instructors lead a roundtable discussion or teach from a lectern. Seminarians come to class with coffee cups, laptops, iPads and the occasional pen and notebook. Deacon Okeke prefers the latter.

From a small Nigerian village, Deacon Okeke is one of 80 seminarians at St. Mary’s. He is one of nine are for the Archdiocese of Baltimore. The men hail from nine other U.S. states and 13 other countries, including Chile, the Philippines, Slovakia, Uganda and Zambia.

Before daily Mass at 11:30 a.m., most seminarians return to the chapel early to pray. They sit evenly spaced in oak pews arranged choir style, facing each other rather than the altar.

Today’s guests include students from Calvert Hall College High School in Towson. They attend Mass, tour the building and break bread with the seminarians. Lunch offerings include a hot pastrami panini and a salad bar.

Sustenance is vital, as the seminary requires rigor while instilling discipline.

Seminarians take two years of pre-theology and four years of theology. The cost of tuition, formation, room and board in 2012-13 is $29,450. Most arrive with a bachelor’s degree. About two-thirds who enter as first-year seminarians graduate.

Deacon Okeke has three classes on Tuesdays and Fridays. Besides Theology of the Eucharist, today’s classes are Patristics, taught by Sulpician Father Thomas R. Hurst, president rector, and Eighth-Century Prophets.

Come Wednesday, Deacon Okeke is stationed at St. Ignatius, Hickory, where he assists with pastoral work. He enjoys preaching, which he expected to do for the first time at daily Mass Nov. 8.

“It’s the way you communicate to people,” Deacon Okeke said. “You shouldn’t take preaching for granted.”

Father Griswold said seminarians learn about the “tools in your preacher’s tool chest. … We realize this is something we need to do well.”

The Society of St. Sulpice, dedicated to the formation of priests, was founded in 1641 in Paris. Its first principle is formation in community.

“We share life, we share meals,” said Father Griswold, who added “it’s that presence and interaction” that’s vital to formation.

At its current location since 1929, St. Mary’s was established as the first Catholic seminary in the U.S. in 1791, on Paca Street in Baltimore. It was started and continues to be run by the Sulpicians, who had fled religious persecution after the French Revolution.

In late afternoon, before evening prayer begins at 5:15 p.m., the halls of St. Mary’s are quiet. People are scarce.

Following dinner – carved turkey breast with mashed potatoes and gravy is the most popular meal – Deacon Okeke retires to his single room on the fourth floor, to study and relax. The room is cozy, with a statue of Mary, and a crucifix and other religious symbols adorning the walls.

Like other institutions of higher learning, the seminary has a workout room and two lounges, which include an arcade game, pool table and bar. A few weeks earlier, seminarians gathered in one of the lounges to watch the Orioles playoff series against the Yankees.

Elsewhere, there is an unspoken, no-nonsense tone. Without their collars, seminarians appear to be typical guys, but they are embarking on a lifetime commitment.

Once a month, Deacon Okeke meets separately with his spiritual advisor, Monsignor Arthur F. Valenzano, rector of the Basilica of the National Shrine of the Assumption of the Blessed Virgin Mary, Baltimore, and his mentor, Capuchin Franciscan Father Timothy Kulbicki, St. Mary’s academic dean.

With Father Kulbicki, they focus on four areas – human, spiritual, theological and pastoral – to find a healthy balance.

“If you have a problem, talk to him,” Deacon Okeke said of Father Kulbicki.

St. Mary’s isn’t exclusively a Catholic institution, as it also houses the Ecumenical Institute of Theology, founded in 1968.

It numbers about 150 students. It offers fully accredited master’s level courses and degrees to men and women who range in age from their 20s to 70s and encompass many faith traditions. Classes are in the evenings and on Saturdays.

Kimberlee Piper, a United Methodist, drives at least an hour every Tuesday from Dallastown, Pa., for Fundamentals of Theological Ethics.

Piper, who is on the institute’s pastoral care track, expects to earn a master’s degree in church ministries and graduate in spring 2014. She wants to become a hospital chaplain.

“A school set up to be ecumenical really intrigued me,” said Piper, 50, currently a stay-at-home mom. “The environment is so open and encouraging.”

Learning about other faiths “widened my eyes,” Piper said.

“It made my knowledge real and broad,” she said. “It changed my interactions with other people.”

After Piper’s class ends at 7:40 p.m., she drives back to her home in, York County, arriving home around 9 p.m.

Back in Roland Park, seminarians prepare for the next day, all for the glory of God.

To view the slideshow, navigate the arrows below.