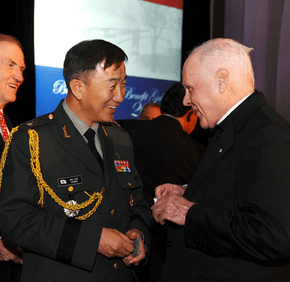 Two weeks to the day after Cardinal Edwin F. O’Brien took possession of the Church of St. Sebastian in Rome, a church named after a Roman soldier and the patron saint of archers, the prelate was honored for his dedication to the men and women in the U.S. armed forces, veterans and their families.

Cardinal Obrien, who served as the 15th archbishop of Baltimore for nearly five years, and is currently the grand master of the Equestrian Order of the Holy Sepulcher, received the Legacy of Service Award from the Vietnam Veterans Memorial Fund during a Nov. 8 gala in Washington, D.C.

The organization, which is dedicated to preserving the legacy of the Vietnam Veterans Memorial in Washington, D.C. as well as promoting healing and education about the impact of the Vietnam War, celebrated its 30th anniversary this year.

Proceeds from the gala will benefit the Education Center at The Wall, a multi-million dollar, state-of-the-art visitor’s center and learning facility to be built on the grounds of the Vietnam Veterans and Lincoln Memorials. The Education Center, which will feature the faces and stories of 58, 282 men and women on The Wall, will help visitors better understand the profound impact the Vietnam War had on their friends and family members.

“I respect those who are promoting this education center at The Wall and anything I can do to bring recognition and appreciation to the military that took part in the sacrifices in Vietnam and their families I want to do that,” said Cardinal O’Brien in a phone conversation prior to receiving the award. “And I think the project of a learning center connected with The Wall is a very admirable one and I think this is going to make up for some lack of appreciation on the part of Americans as to what went on during those years.”

Cardinal O’Brien, now 73, has shown commitment and dedication to the military for many years of his life. The first assignment for the priest of 47 years was as a civilian chaplain at the United States Military Academy at West Point, N.Y., and he was later commissioned to be a military chaplain. In 1970, he became a U.S. Army chaplain with the rank of captain and served with the 82nd Airborne Division in Fort Bragg, N.C. From 1971 to 1972, he served a tour of duty in Vietnam with the 173rd Airborne Brigade and 1st Cavalry Brigade. During his time in Vietnam, Cardinal O’Brien flew by helicopter with a Protestant minister to defensive outposts where they provided for the spiritual needs of the troops.

He served as the Archbishop for Military Services from 1997 to 2007, where he spoke in support of the moral integrity of our military personnel and the importance of deploying our military responsibly.

“They talk about featuring the faces and stories of the 58,282 men and women whose names are on that wall and how they are going to do that I don’t know,” Cardinal O’Brien said. “But I think it will be rather spectacular.”

For more information about the Education Center at The Wall, visit buildthecenter.org