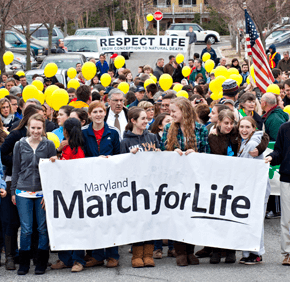 By Maria Wiering
mwiering@CatholicReview.org
Twitter: @ReviewWiering
ANNAPOLIS –Katherine Major, 27, declared “I Am the Pro-Life Generation” with a black-and-white sign.
She walked with her fiancé, Joseph Nwachukwu, 35, down Annapolis’ brick-paved streets March 11 with hundreds of other Marylanders in the state’s annual March for Life.
“In the past, people were so fixated on my ‘rights’ … and now we’re realizing it wasn’t the right choice,” said Major, a parishioner of St. John in Westminster.
“This is a demonstration to the older generation that did pass those laws that we really do believe in protecting life and we’re making strides toward changing the laws that they passed,” she added.
This year marks 40 years of legalized abortion across the United States, an anniversary observed in January during the National March for Life in Washington, D.C.
In 1973, three years after the Maryland legislature defeated a bill to legalize abortion in the state, the Supreme Court ruled in Roe v. Wade that the right to privacy extended to the right to an abortion.
States vary in abortion regulations. In Maryland, abortion is legal through the third trimester of pregnancy, but efforts are underway to make abortion illegal after 20 weeks of pregnancy, when the fetus can feel pain. Members of the House of Delegates will hear testimony on the bill March 15.
Marchers carried signs reading “Stop Fetal Pain,” “Abortion: The Most Unjust Execution,” and “40 Years Too Many.” Many carried yellow balloons that said: “Smile, Your Mom Chose Life.”
A bouquet of balloons bobbed from a stroller pushed by Maria Centenzo, 28, a parishioner of Ascension in Bowie, in Prince George’s County. She pointed to her children: Alexandra, 3, Mark, 1, and, motioning to her pregnant belly, Christine, due in two months.
Marching while pregnant heightens her pro-life convictions, she said, knowing she could still legally abort her child.
“Standing up for life has always been important for me because I feel like babies are the most defenseless of all persons, and they don’t have a voice at all,” she said. “I don’t know how much of a difference it’s going to make here in Maryland, but you have to stand up for them anyway. We have to make the effort.”
Anne Arundel County Del. W. Anthony “Tony” McConkey, 49, carried his 4-month-old son, Liam, in the March. A Republican legislator for 11 years, he said he thinks the atmosphere has shifted to a greater tolerance of pro-life views, but that overall support for legal abortion prevails.
“This March is great,” said McConkey, a parishioner of St. John the Evangelist in Severna Park. “It keeps (the Legislature) from lurching even more extreme on the other side. … We’re able to maintain at least some balance, and this March helps us to preserve that. If the March didn’t happen, if we didn’t have the great showing we have each year, I think it (the Legislature) would feel free to take additional action against that.”
McConkey was among the 17 legislators whose presence was announced at a rally at Lawyers’ Mall in front of the State House. The rally included speakers whose lives have been affected by abortion, including Lisa Yerby-Bryson, a Baltimore pastor. Yerby-Bryson said she had two abortions, but has found healing and forgiveness through her faith in God.
Prior to the March, Archbishop William E. Lori celebrated Mass at St. Mary. About 500 people attended.
“Essential to the proclamation of the Gospel is the church’s teaching on the inviolable dignity of the human person from the moment of conception until natural death,” he said in his homily.
He emphasized that the church’s teaching is not a “policy statement,” and that the church is not a think tank or “a humanitarian institution with public policy objectives.” Rather, the church is “a living body, a community of brothers and sisters in the body of Jesus Christ.”
“In revealing the father’s love, (Jesus) revealed at the same time the dignity of every human being, for every person is created in God’s image, and called to friendship with the triune God,” he said. “This vision of faith confirms what reason teaches about human life and dignity, and informs every aspect of the church’s moral and social teaching.”
Also see:
Mount de Sales student honored an March for Life
Forty years after Roe v Wade, young lead the fight for life
March 13, 2013 CatholicReview.org
March 12, 2013 CatholicReview.org
PrevNext