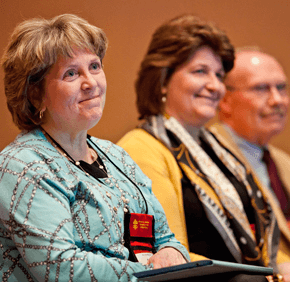 By Elizabeth Lowe
elowe@CatholicReview.org
Twitter: @ReviewLowe
As parish priests shoulder additional responsibilities, people such as Pat Allshouse, an associate for faith formation at the Catholic Community of St. Francis Xavier in Hunt Valley for more than two decades, are engrossed in church leadership.
“I worry about our pastors,” Allshouse said. “There’s so much on them. That’s why I’m interested in lay leadership. I think God is calling me in this direction.”
Allshouse was among the hundreds gathered at the Hilton Baltimore for the second annual Mid-Atlantic Congress March 7-9. The conference, designed to strengthen pastoral ministry at parishes, schools and dioceses, offered classes and breakout sessions.
This year’s MAC theme was “Forming Catholic leaders for faith-filled service.”
In addition, each day had a different theme.
At St. Francis Xavier, in addition to coordinating religious education and sacramental and adult formation programs, Allshouse’s tasks include negotiating new copy machine and phone system contracts.
“It’s important to work smarter,” Allshouse said. “It doesn’t mean we become more secular. They (parishioners) expect us to be in the 21st century, they expect us to be efficient.”
Allshouse attended six sessions, focused primarily on management, including “Managing Successful Transitions,” which was led by Carol Fowler of the Archdiocese of Chicago and Dennis Corcoran of the Diocese of Paterson, N.J.
“We’re in a religious marketplace,” Allshouse said. “It’s important we have good management and good leadership.”
Allshouse likes conferences such as the MAC because “at a bigger venue like this, you meet people from other parts of the country. It helps me to see the church bigger.”
JoAnn Griffin, retired coordinator of religious education at St. Columba in Hopewell Junction, N.Y., said the MAC was a Lenten retreat for her.
“The most important thing you can do is not what you say but how you live your life, how you witness to the Gospel,” Griffin said.
Peggy Shaffer, a greeter, lector, extraordinary minister of holy Communion and Rite of Christian Initiation of Adults volunteer at St. Rita in Dundalk, said what she learned “will make a difference in my life and what I can take back to our parish committees.”
As a member of the St. Rita welcoming committee, Shaffer gained a “holistic view of hospitality” and learned to “look through the eyes of the parish as a newcomer.”
Ryan Mullaney, director of music ministry at Our Lady of the Mountains in Cumberland, said the MAC helped him to be “more secure in my faith” and “regrounds me on what I’m doing in the grand scheme of things.”
Baltimore Archbishop William E. Lori was the principal celebrant at a March 8 liturgy at the adjoining Baltimore Convention Center.
The two dozen other concelebrants included Baltimore Auxiliary Bishop Denis J. Madden; Monsignor Richard W. Woy, vicar general; Paulist Father John Hurley, director of the archdiocese’s Department of Evangelization and co-chairman of the congress; and Father Gerard C. Francik, pastor of St. Mark, Fallston.
In his homily, Archbishop Lori said “we have gathered at an extraordinary time in the life of the church. We are focused on the question of leadership, leadership in the life of our church.”
He continued, “When that theme was chosen, little did we imagine this congress would coincide with the process of choosing a new pope to lead the whole church in truth and in love.”
Archbishop Lori told the hundreds assembled that leaders must know their talents, strengths, weakness, foibles and sins.
“Leaders need to have genuine humility before their God,” Archbishop Lori said. “This was touchingly demonstrated in the decision of Pope Benedict XVI to bring his pontificate to an end and to begin a life of prayer for us all. It’s hard to miss his humanity and his humility.”
He continued, “It is imperative for those who would lead to know the Lord himself and to know the Lord deeply through word and sacrament coupled with a life of daily personal prayer and charity. It’s imperative for anyone who would lead in the church to be rooted in the truth and the love that is the Lord Jesus Christ.”
More than 50 dioceses and archdioceses were represented at the conference, co-sponsored by the Archdiocese of Baltimore and the Association of Catholic Publishers, in partnership with the National Leadership Roundtable for Church Management.
PrevNext