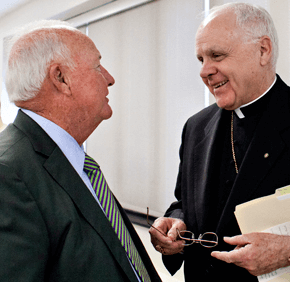 By George P. Matysek Jr.
gmatysek@CatholicReview.org
St. Agnes Hospital has reached an agreement with the Archdiocese of Baltimore to purchase the Southwest Baltimore property where the former Cardinal Gibbons High School is located.
William Greskovich, vice president of operations and capital projects for the nearby Catholic hospital, made the announcement during a March 2 press conference at St. Agnes. The property will be redeveloped to include community housing, office space for the hospital, recreational activities and a community baseball field on the site of the same ball field where Babe Ruth played as a student at St. Mary’s Industrial School – the school that existed on the property before Cardinal Gibbons.
“The overall goal for the project is to create a space that is inviting, welcoming and supportive to all the community,” Greskovich said. “As we continue to discuss and enter into our study period, we expect to continue to engage our neighbors to ensure that this historical land is respectfully developed so that those who left their fingerprint on the community will be proud of what we put there and those that still cherish it today will also be proud.”
In the two years since Cardinal Gibbons closed as part of a schools consolidation plan, the archdiocese received many offers for the property – including some that were financially more attractive, according to Cardinal Edwin F. O’Brien.
The cardinal said he was pleased that Caton Corner will remain a “Catholic corner,” with a Catholic presence at St. Agnes and Catholic Charities’ Jenkins Senior Living Community on one side of Caton Avenue and Seton Keough High School, Holy Angels Catholic School and the redeveloped Gibbons property on the other.
“We could not ask for better partners in fulfilling the Church’s mission of serving others, regardless of faith,” he said, “whether through health care, education or housing.”
Cardinal O’Brien said the decision to close Cardinal Gibbons was “the most difficult and painful of my tenure as archbishop of Baltimore.”
“I hope and pray that today’s announcement will help to salve some of those wounds,” he said, “and that the Gibbons’ legacy as a place of hope and service to others will live on in this storied property’s next chapter.”
Greskovich noted that the gymnasium at the former school will be preserved. The grotto will be turned into a commemorative memorial to the history of Cardinal Gibbons School. He hopes that employees of St. Agnes and those involved in the hospital’s residency program will live in the housing component of the project.
A portion of the 32-acre property will be carved out to allow for the possible future expansion of Seton Keough High School, Greskovich said. In addition to the revitalized Babe Ruth field, another all-purpose field will be erected. The home plate on the Babe Ruth field will be located on the exact spot where it had existed in Ruth’s era, he said.
“Children will be able to step up to the plate and say, ‘that’s where Babe swung at the ball for the first time,’ ” Greskovich said.
Some Gibbons buildings will be retained, he said, while others of less historical importance will be razed. Greskovich said any new buildings may not be completed for three years. Work on the ballparks could happen more quickly.
Catholic Charities is expected to be involved as a partner in the redevelopment project, as is the Cal Ripken Sr. Foundation.
Former state Sen. Frank Kelly, board chairman of the Cal Ripken Sr. Foundation, said the ballpark will be one of the foundation’s “youth development parks.”
“When we build these fields, the law enforcement community comes in and partners with us,” he said, “so kids at risk will look up to the law enforcement officers instead of the drug dealers in town.”
Kelly said his foundation “never dreamed” it would play a role at the Gibbons property.
“I just can’t tell you how excited we are to be partners and to work to do the best possible job we can,” he said.
Discussions between St. Agnes and the archdiocese about the purchase of the property began in December. The sale price has not been finalized, according to Greskovich.
When Cardinal Gibbons closed, St. Agnes officials said the hospital was not pursuing the property. That changed in the last several months as the economy improved and the hospital focused on looking for ways of making sure the property was developed properly.
“It’s not what a pure developer might do,” Greskovich told the Catholic Review, “but, in terms of benefitting the community and preserving green space, it’s the right thing to do.”
Greskovich said a connecting bridge will be built over Caton Avenue to link St. Agnes with the Gibbons property.
“We feel that would be a keystone to the project,” he said.
St. Agnes officials met with a group of Cardinal Gibbons alumni March 1, most of whom were affiliated with Gibbons Educational Services (GES). GES was formed to promote educational opportunities and to preserve the history of Cardinal Gibbons and St. Mary’s Industrial School.
In a March 2 statement, GES expressed satisfaction with the St. Agnes project.
“We are still disappointed in the archdiocese’s decision to close our school, and there will never be anything that truly replaces it in our hearts,” the statement said. “However, the genuine excitement and passion we felt from Saint Agnes representatives demonstrated their true intentions to reopen the campus as a Catholic community for Southwest Baltimore.”
PrevNext