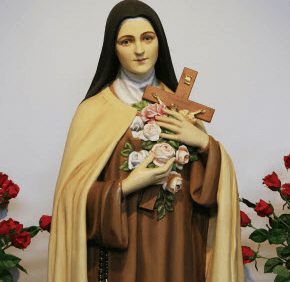 We all need hopeful signs in difficult and dark times. Allow me to tell a story.

While I was leading a men’s retreat at St. Joseph’s in the Hills – Men of Malvern – an extraordinary ministry of holy Communion told me of his visiting a patient in a hospital. The patient told the story of being diagnosed with multiple myeloma, a very aggressive form of cancer. He was given less than a year to live.

So, he took his 9-year-old son, and the two of them went to visit a shrine. At the shrine there were various statues of different saints. They stopped at each statue, said a prayer, and lit a candle. Then they came to a very unusual statue of St. Therese of Lisieux – the Little Flower. Unlike the other statues of plaster or marble, this statue was actually wearing clothes. She was wearing a real rosary, and his little boy played with the beads. Unlike other statues of St. Therese, which picture her holding roses, she held a bouquet in one hand and had the other hand stretched toward him with a single rose in it. He felt like she was offering this silver tipped rose to him, and he almost took it.

The little boy said: “Dad I want to see something. I’ll stand over here, and you stand over there.” They split apart. Then the little boy said: “Dad, she’s looking at you.” He felt like she was looking at him. They said a prayer, and lit a candle. They moved on, but just couldn’t get the statue out of their minds. So the father said the next day: “Let’s go back and take another look at that unusual statue.”

They went back. When they got to the place where the statue had been, there was an old statue there of St. Therese, with a chip out of it. They found a maintenance man and asked: “What happened to that beautiful statue that was here yesterday?” The man replied: “I don’t know what you’re talking about.” Pointing to the old statue he said: “That’s the statue that’s always been here.”

It’s been 10 years since that event. The man with a year to live has lived for 10. The little boy is now in college. Both wrote separate accounts of the incident, and the accounts agreed. Why they waited 10 years to tell the story, I’m not sure. I’m glad they did.

A Carmelite nun said that one sign of authenticity is that people are reluctant to tell the story. It’s not about ego. They don’t want to call attention to themselves.

Lent is a time to “let go” of the myriad distractions that keep us from recognizing God’s presence. Humanly, we picture God “out there.” Yet, Jesus revealed that God is also “in here.” God can both break into our lives and out of ourselves. As I grow older, I feel more and more comfortable with the image of God within. Jesus came to set us free from all that covers over the image and likeness of God that we are created in. The saints, or holy people, that “show up” in our lives are reminders that the God who lives in them, also lives in us. Apparitions can help us when faith is weak. But try looking in a mirror as well. See the God within you. See the image and likeness of God that you are. Allow this Lenten Season to reveal your true identity!