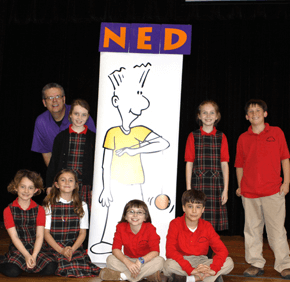 By Catholic Review Staff
On the eve of leap day, students at St. John the Evangelist School in Severna Park reflected on taking a leap of faith with their values.
During a Feb. 28 assembly, the school’s 526 students in pre-Kindergarten through eighth grade attended an assembly focused on values through kid-friendly activities such as yo-yo tricks and magic, said Kitt O’Brien, development assistant at St. John’s.
The values-based assembly was put on by The Ned Show, a group that puts on interactive school assemblies internationally. The Ned Show’s message stands for “never give up, encourage others, do your best.”
The 2011-2012 school year at St. John the Evangelist School is focused on a values code, including the values of honesty, responsibility, self-control, self-respect, tolerance and cooperation, O’Brien said.
PrevNext