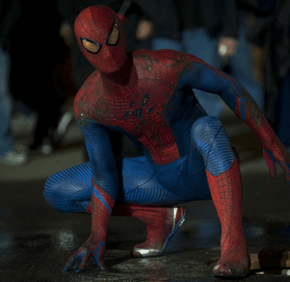 By Joseph McAleer
Catholic News Service
NEW YORK (CNS) — The legendary web-swinger is back, battling teen angst by day and catching crooks at night in “The Amazing Spider-Man” (Columbia), a 3-D reboot of the classic Marvel comic book character.
While the bones of the familiar story remain intact, the style and vision of this version, directed by Marc Webb (“(500) Days of Summer”), are darker, bordering at times on horror and lacking the charm and fun of the recent “Spider-Man” film trilogy. Still, amid the action and thrills lies an inspirational tale about accepting responsibility and using one’s gifts for the greater good.
Peter Parker (Andrew Garfield) is your basic science geek, trying to avoid the bullies in high school and wondering how to catch the eye of his comely classmate, Gwen Stacy (Emma Stone). He lives with his kindly Uncle Ben (Martin Sheen) and Aunt May (Sally Field), who took him in as a toddler when his scientist parents, Richard and Mary Parker (Campbell Scott and Embeth Davidtz), mysteriously disappeared.
Foraging in the basement, Peter discovers his father’s briefcase, put there for safekeeping. Inside are clues to his father’s top-secret work at OsCorp, a genetic engineering laboratory. Desperate for answers regarding his parents’ fate, Peter looks up dad’s former partner, the brilliant Dr. Curt Connors (Rhys Ifans).
The one-armed scientist is obsessed with “cross-species genetics,” combining human and animal DNA to regrow tissue; in his case, an entire arm. Connors has no qualms about playing God. “I long to fix myself,” he says. “Imagine a world without deformities, without weakness. Why be human at all when we can be so much more?”
Poking around in Connors’ lab amid genetically-engineered critters, Peter gets bitten by a spider, and before long is crawling up walls and tingling with “spider-sense.”
As Peter gains confidence — and arrogance — from his new powers, he neglects his family and schoolwork. When Uncle Ben is killed by a gunman Peter could have stopped, Peter becomes a vigilante in search of the killer. Along the way, he embraces Uncle Ben’s advice to do good — and help others in need.
Meanwhile, Connors decides to test his new reptile-based serum on himself. Poof! He grows a new arm — as well as a whole lot of scales in a transformation straight out of “Dr. Jekyll and Mr. Hyde.”
Clearly, it’s not nice to fool with Mother Nature, and Connors — aka “The Lizard” — goes on a rampage, chewing up the sewers and suspension bridges of Manhattan. Peter, now sporting the moniker “Spider-Man,” finds his inner hero as catastrophe looms.
At times “The Amazing Spider-Man” takes itself too seriously, feeling like a Shakespearian drama on steroids. Fortunately, however, there’s enough levity on hand to bring it back down to size.
“What am I, the mayor of Tokyo?” cries Gwen’s father, the chief of police (Denis Leary), as “The Lizard” stomps its way through the city like the petulant son of Godzilla.
The film contains intense action violence, including gunplay, and some rough language. The Catholic News Service classification is A-III — adults. The Motion Picture Association of America rating is PG-13 — parents strongly cautioned. Some material may be inappropriate for children under 13.
– – –
McAleer is a guest reviewer for Catholic News Service.
– – –
Copyright (c) 2012 Catholic News Service/U.S. Conference of Catholic Bishops
PrevNext