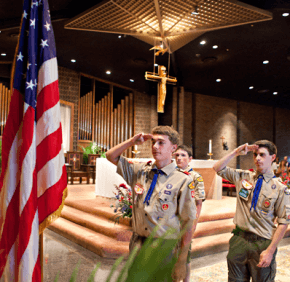 The Pledge of Allegiance, national anthem and patriotic hymns were included in a July 3 Mass at St. John the Evangelist in Severna Park on the eve of Independence Day. The Mass was the final Fortnight for Freedom event scheduled in the Archdiocese of Baltimore.

“Tonight we gather to close this Fortnight in prayer, not to say that our struggle is over, but to ask God for the fortitude, courage and commitment to continue with voice and action to defend this basic right that is ours,” said Bishop Mitchell T. Rozanski, auxiliary bishop of Baltimore, who celebrated the Mass.

In response to perceived threats to religious freedom throughout the country, the U.S. bishops called for the Fortnight for Freedom, which began June 21 and ends July 4, as a way to unite the faithful in prayer, education and public action for the preservation of religious liberty.

Before the Mass, Boy Scouts carried the American and Papal flags to the front of the church and led the congregation in the pledge and Star Spangled Banner.

About 300 people attended the Mass, including Wanda Hartman, a parishioner of Church of the Crucifixion in Glen Burnie. A pin adorned her purse that read “Stand up for religious freedom; stop the HHS mandate.”

Hartman, 61, said she is most concerned about the U.S. Department of Health and Human Services’ mandate that employers, including most religious employers, provide insurance coverage for contraception, abortifacients and sterilization.

“We’ve never had this kind of threat against our religious liberties,” Hartman said.

Watch a video/slideshow of the Mass that includes audio of the Bishop Rozanski’s homily: