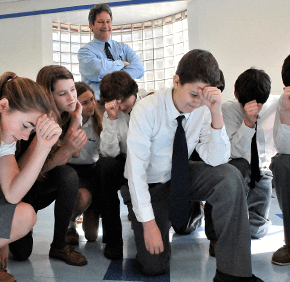 Through prayer and an act of kindness, Tebow also connected with Joey Norris, a 13-year-old eighth-grader from Our Lady of Mercy School in Potomac who is battling leukemia.

This past fall, while Joey was undergoing cancer treatment at Children’s National Medical Center in Washington, his dad, Jim, asked him if he had heard about “Tebowing.” It’s the prayerful gesture made famous by Tebow, who after scoring a touchdown, kneels on one leg and bows his head in prayer, with his arm resting on his bended knee and his fist touching his forehead.

Joey, an avid football fan, had earlier drafted Tebow to be the quarterback on his fantasy football team.

After seeing photos of his favorite player praying, the youngster said, “I want to do that.” And there, in his room at Children’s Hospital, Joey knelt down near his chemo pole, and his dad took a picture of him. Later, as the two were walking to their car, wondering what to call Joey’s gesture, his dad suggested, “Tebowing while Chemoing.”

Joey immediately tweeted that photo to Tebow, explaining that “I’m Tebowing while Chemoing!” The youth added that he was a cancer survivor who was trusting the quarterback with his fantasy team.

Within two hours, Tebow tweeted a response back to Joey, noting that the boy’s tweet was “my favorite one of the day,” and he told him, “Praying for you and God bless you, big man!”

Jim Norris said in an interview with the Catholic Standard, Washington archdiocesan newspaper, that Joey had been “on the fourth day of a brutal five-day chemo regimen” when Tebow tweeted him back.
“By the end of the week, it wipes you out, you don’t feel well. He hadn’t been to school all week,” Jim Norris said. “When Tim tweeted him back, all of a sudden, his eyes lit up. He had the strength to get through that week and couldn’t wait for the weekend.”

Some weeks later, the Tim Tebow Foundation invited Joey and Jim Norris to attend the Broncos’ Jan. 1 home game vs. the Kansas City Chiefs. Joey proudly wore his No. 15 Tim Tebow jersey, and before the game at Mile High Stadium, Tebow finished his warm-up tosses and sprinted over to the sideline to meet Joey.

“He gave me a great big hug, and he gave me a game ball they were throwing around in pre-game,” Joey told the Catholic Standard. The quarterback also gave him a copy of his autobiography, “Through My Eyes,” and a student Bible.

That game, however, lacked a storybook ending, as Denver lost 7-3, and Tebow had statistically his worst game of the season.

Joey said that after the defeat, “you could see the disappointment in his eyes,” and yet Tebow still managed to smile and offer encouragement to his two young guests, talking to them for about 15 minutes and autographing Joey’s jersey, the book and the Bible he had given him.

Win or lose, Tebow “is just the nicest person, all around,” he said. His dad agreed, saying, “He’s the real deal. He’s a caring, loving person who just happens to play football.”

Tebow’s season had its ups and downs, with exciting touchdown passes and runs, but also throws that missed their mark; thrilling victories and disappointing losses.

Joey, who has had his own struggles and triumphs in recent years during his four-year cancer battle, can relate. “He’s such an inspiration to anybody going through anything,” he said of Tebow.

The quarterback’s struggles and end-of-game heroics offer a lesson about endurance, Joey said, adding that even when bad things happen during your day, you can turn it around by the end of the day.

As he continues his cancer treatment, that message resonates with Joey. “During those days when you think you can’t go on anymore, you might lose the battle, but in the end, you’ll win the war. That’s more important than anything. Just have faith,” he said.