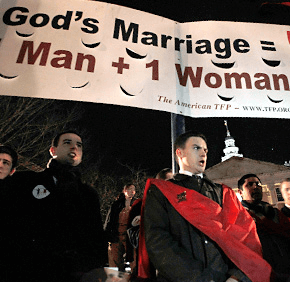 During an evening rally outside the statehouse, sponsored by the newly formed Maryland Marriage Alliance, speakers repeatedly led the crowd in chants that declared marriage to be a union of “one man and one woman.”

Father Michael DeAscanis, pastor of St. Agnes in Catonsville and St. William of York in Baltimore, told the crowd that no one has the right to change the meaning of marriage. Never in history has marriage been defined as being between a man and a man or a woman and a woman, he said.

“Who do they think they are?” he asked. “This is radical, reckless social experimentation. They do not know the consequences.”

“We ask our government to do their job,” he said. “Fix the problems we already have. Don’t make new ones.”

Father DeAscanis read a letter from Cardinal-designate Edwin F. O’Brien in support of traditional marriage. The cardinal-designate was in Haiti and could not attend the rally. In his letter, Cardinal-designate O’Brien, apostolic administrator of Baltimore, said the family, by nature, can only begin through the union of one man and one woman.

The cardinal-designate said families come in all shapes and sizes, and they all “deserve support and protection,” but he noted that every child deserves to know he or she belongs to both mother and a father.

Cardinal-designate O’Brien said same-sex marriage legislation can be defeated “if we have faith in the power of truth.” He also thanked supporters of traditional marriage for their “courage.”

Katie O’Malley’s husband, Gov. Martin J. O’Malley, is sponsoring the bill that would legalize same-sex marriage. The Catholic governor was expected to testify in person in support of the same-sex marriage bill during a Jan. 31 Senate committee hearing.

Bishop Angel Nuñez of the Bilingual Christian Church, Baltimore, said he will “not be intimidated by those who try to make us look like bigots or cowards.”

Baltimore Sen. C. Anthony Muse added that “one should not be bullied” or “bought” into changing one’s position on marriage. Lawmakers should be dealing with issues such as education and predatory loans, he said.

“Those are the real civil rights issues,” he said.

Deacon Al Turner of the Archdiocese of Washington said the large turnout in support of traditional marriage might “bring something new to Annapolis: common sense.”

“We are not sophisticated lobbyists,” he said. “We are simple people of faith and goodwill. We cannot be silent anymore.”