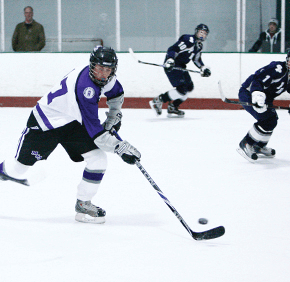 By Kyle Taylor
Review correspondent
While ice hockey is considered to be one of the fastest team sports in the world, it tends to get overshadowed by others. Thomas Sears, however, jumps at the opportunity to leave his mark in the rink.
The Mount St. Joseph senior is the center on the Gaels’ varsity ice hockey team. A team captain, Sears said he enjoys playing the sport because it’s almost like a rare privilege to be able to play it at school.
“It’s a fun sport,” Sears said. “A lot of kids don’t get the opportunity to play it. It’s like basketball and soccer and lacrosse, in that you’re moving up and down the field trying to score.”
Sears has played on the Gaels’ tier I and tier II hockey teams since his sophomore year. That type of continuity plays a big role in an actual game according to Sears.
“If you’ve got good team dynamics, with a bunch of guys who really trust each other, it makes things go really well when playing,” he said. “Once you get out there it and you know who you’re playing with, it’s completely different than playing with random people. You can play off of what they’re good at.”
As the center, it is Sears’ responsibility to put teammates in positions to use their talents to make plays.
“The center in hockey is the playmaker – you’re all over the ice,” Sears said. “You’re helping out down low on defense and on offense. You’re just about in the middle of every play.”
Coach Rob Merson said he expects Sears to make plays because of his hustle and strong work ethic on the ice. Because of it, Sears is usually one of the top scorers on the team that despite lacking recent club team experience.
“I have a lot of kids on the team who play club hockey on different levels,” Merson said. “Tom usually played club hockey but he didn’t this year, but it doesn’t show. He’s still one of the better players on the ice.”
Sears’ admirable work ethic serves him well in the classroom, too. He currently manages a course load that includes all AP classes, such as calculus, physics, psychology, and English Literature.
He’s the vice president of Mount St. Joseph’s chapter of the National Honor Society, a member of the Spanish National Honors Society and is a member of the Big Brother Leader Program, where seniors and juniors help incoming freshmen get acclimated to high school.
He’s also a senior leader in the junior retreat program and has done community service at My Brother’s Keeper soup kitchen in Baltimore.
A member of Calvary United Methodist Church in Mount Airy, Sears plans to enter the U.S. Naval Academy in the fall. He’s already received a letter of assurance and is waiting on a congressional nomination in order to be officially accepted.
Thomas Sears
Mount St. Joseph Senior
Credentials
Vice president of National Honor Society chapter, currently taking all AP classes; active volunteer, captain of Gaels’ ice hockey team; hopes to enter U.S. Naval Academy
PrevNext