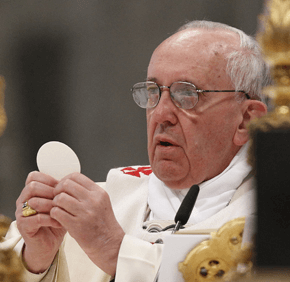 By Cindy Wooden
Catholic News Service
VATICAN CITY – During summer vacation season, when there is no congregation of Vatican workers and no homily, Pope Francis continues to celebrate daily Mass in his residence and, since mid-July, has been using hosts made by women incarcerated in an Argentine prison.
The hosts were delivered to the pope July 16 by Bishop Oscar Ojea of San Isidro, who regularly visits the San Martin Penitentiary outside Buenos Aires.
The prisoner in charge of making the hosts, Gabriela Caballero, 38, has served three years of a seven-year sentence, according to Il Sismografo, a blog close to the Vatican.
In an interview with the Argentine news agency NOVA, Caballero said: “I know Bishop Ojea because he often comes to visit us. When I heard that he was going to visit the pope, I had no doubt it was the time to donate to the pope some of our handmade hosts and photographs of our workshop.”
The pope began using the hosts at his morning Mass July 18, and he wrote a personal thank-you letter to Caballero July 19, telling her that celebrating Mass with the hosts was “moving,” and also thanking her for her prayers.
“I never imagined he would write to me,” Caballero told NOVA, although some of her fellow prisoners tried to convince her that he would because “he wants to be close to people and we are people.”
Reading the pope’s handwritten “‘Dear Gabriela’ was a shock for me when I’m deprived of my freedom and in a place where there are long, dark hours,” she said. “I’m happy to know that one can reach the Vatican even from prison.”
Father Jorge Garcia Cuerva, chaplain to Caballero and the other inmates of Unit 47 at St. Martin, said the host-making operation began in a prison bathroom with old implements loaned to the women by a group of nuns.
“The hosts from this workshop that started in a prison bathroom are at the center of the church because they become the Eucharist,” he said.
See also:
Vatican orders slight change in text for baptism
Vatican officials dubious of retired pope’s extraordinary ‘mystical experience’
Copyright (c) 2013 Catholic News Service/U.S. Conference of Catholic Bishops
PrevNext