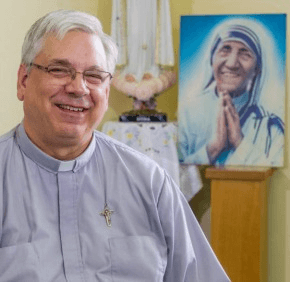 ROME – In the chapel of the first house Blessed Teresa of Kolkata established in Rome,  Father Brian Kolodiejchuk of the Missionaries of Charity talks about her life, mixing the concrete and even mundane with the spiritual and even mystical.
“She was very human – she loved chocolate, she loved ice cream,” the priest said. At the same time, her letters to her spiritual directors make it clear “she’s among the great mystics of the church,” having experienced the sweetness of hearing Jesus’ voice and, later, the desolation of feeling he had abandoned her.
“Mother Teresa was no plastic saint,” said Father Kolodiejchuk, who is superior general of the Missionaries of Charity Fathers and postulator of Blessed Teresa’s sainthood cause. Mother Teresa was a “very concrete, feet on the ground” organizer and hands-on minister to the poorest of the poor, he said.
The priest, a native of Canada, spoke to Catholic News Service Aug. 19 at the home Mother Teresa initially founded in Rome for novice sisters. Now a base for the order’s priests, it is a warren of rooms built around a courtyard covered with a densely leafed grape vine laden with fruit nearing purple ripeness.
The grapes should be ready for harvest by Sept. 4, the date Pope Francis is scheduled to declare Blessed Teresa a saint.
“Mother Teresa could be the patron saint of women who are having difficulty conceiving,” Father Kolodiejchuk said when asked for suggestions. When couples would tell her they were having trouble having children, “she would take a miraculous medal, kiss it and then she would say simply, ‘Say this prayer: “Mary, mother of Jesus, give us a child.’” That was the whole prayer. And sure enough, one year later there would be the couple with a baby in hand.”
But the priest, who travels constantly as superior of his order and chief promoter of Blessed Teresa’s sainthood cause, said she also could be the patron saint of airplane travelers. “She’s my personal patron saint for my luggage,” he said. Before a trip, he says a little prayer and “I have never had any difficulty with my luggage. Never lost. Always shows up.”
Mother Teresa’s canonization is the church’s formal proclamation that she is with God and can intercede on behalf of those who pray for her assistance, Father Kolodiejchuk said. Sainthood recognizes that she “lived in an excellent way – a heroic way – the Christian life and shows us concretely what the Christian life involves.”
For Father Kolodiejchuk, “the single most heroic aspect of her life” is her extraordinary commitment to God, the church and the poor despite what Mother Teresa described in letters to her spiritual director as “the darkness,” a feeling that lasted some 50 years.
“She was a woman passionately in love with Jesus,” Father Kolodiejchuk said. “As a young religious she made this resolution to love him as he’s never been loved before, which is a daring thing to say if you are taking it seriously.”
In 1946, Mother Teresa – at the time a Loreto sister – heard the voice of Jesus calling her to serve him in the poorest of the poor. It was an intense, mystical experience of “that union, that presence, that intimacy with Jesus,” he said. “And then she lost it and that’s painful.”
“So the trial is that she feels that Jesus doesn’t love her. She feels unwanted, unloved,” he said.
Father Kolodiejchuk said that for Mother Teresa, it was like “a woman who loves passionately her husband, but it seems like he couldn’t care less, and yet she is there faithfully, loving, doing all the things a loving wife would do.”
Living through that experience with “heroic faith,” constant acts of charity and real love for God and for the poor, he said, is a witness to the real meaning of commitment and that “love is not principally a feeling. Certainly that’s part of it for almost everyone, but in the end, it is classical Thomas Aquinas: Love is in the will. It’s our choosing.”
Feeling unloved was not just a painful experience for Mother Teresa, he said. It was also another way for her to live in deep communion with Jesus and with the materially and spiritually poor she dedicated her life to serving.
In the chapel of every Missionary of Charity community, next to the crucifix, are the words of Jesus, “I thirst.”
“Thirst for Jesus explains everything” the missionaries do, he said. From the very beginning, Mother Teresa said the order was founded “to quench the thirst of Jesus on the cross for love and souls. So, in this darkness, she is quenching, satiating Jesus’ thirst by, paradoxically, not experiencing that love. Or to say it in another way, they are so united that Jesus can share with her his most terrible pain.”
Her experience of feeling unloved also meant she lived “in solidarity with the spiritually poor,” Father Kolodiejchuk said. “She would have this empathy because she would have the same sense of, ‘Yeah, I know what it is to be unloved and unwanted and feeling lonely – to want to love and be loved, and it seems like it’s not there.’”