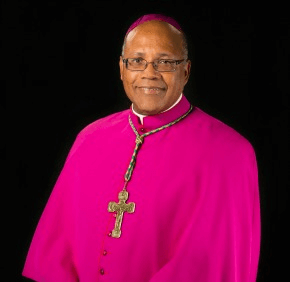 By Catholic News Service
WASHINGTON – Pope Francis has accepted the resignation of Bishop J. Terry Steib of Memphis, Tennessee, and has appointed as his successor Auxiliary Bishop Martin D. Holley of Washington.
Bishop Steib has headed the Memphis Diocese since 1993. He is 76. Canon law requires all bishops to turn in their resignation at age 75. Bishop Holley, 61, has been a Washington auxiliary since 2004.
The changes were announced Aug. 23 in Washington by Msgr. Walter Erbi, charge d’affaires of the Vatican nunciature.
Washington Cardinal Donald W. Wuerl said the appointment was “a blessing for that diocesan church” and “also a joy for all of us in Washington.”
“Bishop Holley has demonstrated both pastoral sensitivity and administrative ability that should serve him well as he now undertakes his new ministry in western Tennessee,” he said in a statement. “We rejoice that the Church of Memphis is receiving such a talented and caring pastor of souls.”
Bishops Steib and Holley are two of the nation’s 15 black Catholic bishops. With Bishop Steib’s retirement, eight of them remain active, according to the U.S. Conference of Catholic Bishops’ Secretariat of Cultural Diversity in the Church.
Bishop Holley was appointed auxiliary bishop of Washington May 18, 2004, and was ordained a bishop July 2, 2004. He is vicar general for the Archdiocese of Washington and is a member of the archdiocesan college of consultors, priests’ council, seminarian review board, administrative board and chairman of the College of Deans.
Cardinal Wuerl in his statement noted that Bishop Holley is a former moderator of the archdiocese’s ethnic ministries and in that capacity “was able to see that the pastoral needs of all the ethnic and language communities” in the archdiocese “were appropriately addressed.”
Martin D. Holley was born Dec. 31, 1954, in Pensacola, Florida. He attended Alabama State University in Montgomery, where he specialized in administration and earned a bachelor of science degree.
After working from 1977 to 1982 in the Pensacola-Tallahassee diocesan chancery, he studied theology at The Catholic University of America in Washington and at St. Vincent de Paul Regional Seminary in Boynton Beach, Florida.
He was ordained a priest of the Pensacola-Tallahassee Diocese May 8, 1987.
In addition to parish assignments after his ordination, he was spiritual director of the Serra Club of West Florida, director of the diocesan Department of Ethnic Concerns, a member of the diocesan education commission and spiritual director and instructor of the permanent diaconate formation program. He also was adjunct director of vocations and president of the priests’ council.
When he was named a bishop, then-Father Holley had been pastor of Little Flower Parish in Pensacola for two years. Before that, he was administrator there for two years.
James Terry Steib was born May 17, 1940, the eldest of five children of a sugar cane worker. He grew up on a farm in Vacherie, Louisiana. He entered the Society of the Divine Word order at a high school seminary in Bay St. Louis, Mississippi.
After studies at three Divine Word collegiate seminaries, he was ordained a priest Jan. 6, 1967. Then-Father Steib served his order first at seminaries and then as provincial of the Divine Word’s Southern province until he appointed an auxiliary bishop of the Archdiocese of St. Louis Dec. 6, 1983. He was ordained a bishop Feb. 10, 1984. He also served as vicar general of the St. Louis Archdiocese.
He was appointed fourth bishop of Memphis in March 23, 1993, and when he was ordained a bishop and installed to head the diocese in May of that year, he was one of only two black bishops heading the U.S. dioceses at that time. The other was the now-retired Bishop Joseph L. Howze of Biloxi, Mississippi.
On the national level, he is a former executive director of the National Black Catholic Clergy Caucus and a former vice president of the Conference of Major Superiors of Men Congregation.
Bishop Steib is a former chairman of the U.S. bishops’ Committee on Missions and its Committee on Black Catholics and has been a member of a number of other committees, including the Administrative Committee.
The Diocese of Memphis comprises 10,682 square miles in the state of Tennessee. It has a total population of 1.57 million; just over 65,000, or about 4 percent, are Catholic.
Copyright ©2016 Catholic News Service/U.S. Conference of Catholic Bishops.
See also:
Unlocking forgiveness: Vatican tribunal promotes pardon
Mother Teresa knew what being unloved felt like, priest says
PrevNext