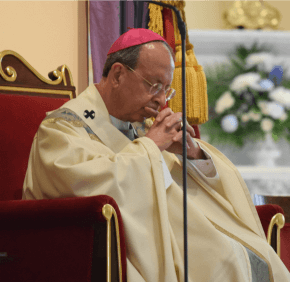 Celebrating a mid-day Mass for the feast of the Assumption on the patronal feast of America’s first cathedral, Archbishop William E. Lori of Baltimore pointed out that the weight of sin and the burdens of everyday life hold us down.

In his Aug. 15 homily at the Basilica of the National Shrine of the Assumption of the Blessed Virgin Mary, the archbishop noted that Mary’s assumption, body and soul, into heaven may seem far removed from our daily lives, seen as a privilege for the Mother of God alone.

He urged the churchgoers to think about times they have been burdened by sin, including gossiping about an absent friend. He noted that people usually feel weighed down with guilt and ashamed after they have sinned.

Conversely, in moments when we realize we have been blessed in extraordinary ways or consoled in prayer, “Don’t our spirits soar?” he asked.

When we successfully complete a project or receive good news about our health, “Don’t we feel the weight of the world has been lifted from our shoulders?”

Archbishop Lori said, “Freed from original sin, (Mary) opened her heart to the Word of God and to all that the Lord would ask of her in fulfilling his plan of salvation. Long before Jesus preached the Beatitudes, Mary was living them – full of joy because she was poor in spirit, pure of heart, meek and mild.”

It’s no surprise, then, that the Mother of the Lord was lifted up by God, since she had spent her whole life lifting up her son, he said.

“Fulfilling her vocation involved misunderstanding, suffering, self-denial and a complete share in the death of her beloved son upon the cross,” the archbishop said. “Through it all, her sinless heart was blessed because it was lifted up to the Lord.”

Mary rejoiced at the Resurrection and at Pentecost.

“Mary’s Assumption, then, is not a miracle out of the blue, but rather the completion of a life always lifted up, always directed to the Lord,” the archbishop said, adding that Mary knows the burden of our sins and the problems that weigh us down.

“Her role is to lead you and me to Jesus to free us from the burden of our sins and to help us bear our sufferings with generosity toward others in their need.”

With Mary’s help, we, too can prepare to enter the Kingdom of Heaven, he said.

The Mass was attended by about 300, according to Deacon Sean Keller of the basilica, who proclaimed the Gospel reading, despite the fact that the Assumption was not a holy day of obligation this year. The crowd included downtown business people, families and others.

Catholics are normally obligated to attend Mass on the Assumption, but are not required to do so when the feast falls on a Monday, as it did this year.

The solemnity commemorates Mary’s Assumption into heaven, body and soul, after her earthly life. An ancient belief of the church, the Assumption became an official doctrine of the church Nov. 1, 1950, when Pope Pius XVII defined it to be a dogma of faith. It was the only exercise of papal infallibility in the 20th century.

Watch a video recording of the Mass here.