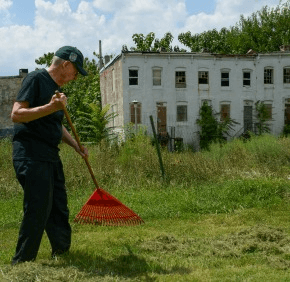 A heat index above 100 did not deter dozens from across the country from dropping in on West Baltimore Aug. 13 to participate in the ongoing effort of building the “beloved community.”

Popularized by the Rev. Dr. Martin Luther King Jr., the concept – in which bigotry and strife are replaced by inclusiveness and harmony – served as a reflection point for Pax Christi USA at its 2016 national gathering, held Aug. 12-14 at the DoubleTree by Hilton Hotel Baltimore in Linthicum Heights.

The weekend included workshops and lectures zeroing in on the intersection between racial justice and other injustices associated with environmental destruction, the U.S. criminal justice system, militarism, immigration and Islamaphobia.

To get a taste for such actions, the majority of the gathering’s 125 participants helped clean two large vacant lots on the 900 block of N. Carrollton St., located in Baltimore’s Sandtown-Winchester neighborhood, the scene of Freddie Gray Jr.’s arrest as well as the brunt of the unrest that followed his death of injuries sustained while in police custody in April 2015.

The Pax Christi volunteers mowed overgrown grass and weeds and filled dozens of trashbags with broken glass and other debris.

Lightening their workload were members of the No Boundaries Coalition – a resident-led advocacy organization focused on bringing unity to Central West Baltimore – who got a several-hour head-start on the work.

“A lot of people talk, or this or that,” said Samirah Franklin, a youth organizer, “but No Boundaries just does it.”

The organization’s office is located at St. Peter Claver Parish, a couple blocks north of the cleanup site. Josephite Father Ray Bomberger, the pastor, was out with the morning No Boundaries crew, pruning the hardwoods on the vacant lots.

“It’s transformative,” said Ray Kelly, director of community relations for No Boundaries and a pastoral council member at St. Peter Claver, of the effort. “This is doing what you have to do to make your neighborhood a certain way.”

Kelly briefed the Pax Christi volunteers as they arrived, pointing out that the drug activity native to the block had vanished as community members arrived with cleanup gear.

“We appreciate you guys coming out,” he added. “Now, get to work.”

Sister Patricia said that it was important for Pax Christi to partner with a community group “already on the ground, trying to empower the people of their own neighborhood.”

“With Pax Christi USA being a predominantly white organization, we didn’t want to come into the neighborhood and be perceived as a ‘great white hope,’” she explained.

Pax Christi USA Executive Director and Sister of Notre Dame de Namur Patricia Chappell, works with Jackson, Mississippi native Raymond Barry, as part of a social justice project in the 900 block of N. Carrollton Ave., in West Baltimore Aug. 13. (Kevin J. Parks/CR Staff)
The organization chose Baltimore for its service project, Sister Patricia said, “because of the inequality as it relates to the criminal justice system, as well as it relates to housing and economic disparities.”

She added that the selection was made long before the Department of Justice issued its Aug. 10 report, which found that the Baltimore Police Department makes unconstitutional stops, searches and arrests, and engages in enforcement strategies that produce “severe and unjustified disparities in the rate of stops, searches and arrests of African Americans.”

Eli McCarthy of Tacoma Park noted that the gathering’s theme of racial justice was apropos for the day.

Most inspiring, he said, was an Aug. 12 lecture by Lisa Sharon Harper of Sojourners magazine which touched on the concept of all people being made in God’s image, and how racism attacks that concept.

“In the church, we still have a ways to go with that,” McCarthy said. “There are a lot of people in the church who struggle with the need to affirm that black lives matter. Not in a way that other lives don’t matter, but they have a particular need and challenge, and we should stand up for that, as in the church’s preferential option for the poor.”

McCarthy, who helped clean the lots with his son, Lazarus, is director of peace and justice for the Conference of Major Superiors of Men.

Many of the Pax Christi volunteers acknowledged that more than their day of service is needed in West Baltimore.

“It’s a drop in the bucket, but if it can make a few people happy and able to use their green space, that’s good,” said Peggy Meyer, a member or Pax Christi USA and co-chair of the social action committee at St. Vincent de Paul Parish in Baltimore. “Hopefully, they’ll see Christ in this, and we’re doing it for the Christ in them.”

According to Art Laffin, a member of the Dorothy Day Catholic Worker house in Washington, D.C., the work never ends.

“When Jesus says to feed the hungry, or clothe the naked, he’s not saying to wait until somebody tells you to do it,” said Laffin, who was presented with the Teacher of Peace Award Aug. 14, the final day of the gathering. “If you see someone in need, you help them. Take personal responsibility. That’s the call of the Gospel.”