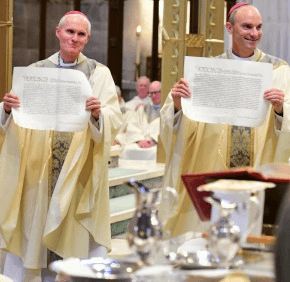 During their Jan. 19 ordination liturgy at the Cathedral of Mary Our Queen in Homeland

Following their Jan. 19 episcopal ordination at the Cathedral of Mary Our Queen in Homeland, Bishop Adam J. Parker and Bishop Mark E. Brennan, the new auxiliary bishops of Baltimore, recalled the Litany of the Saints, during which they lay prostrate before the altar.

“I felt a lot of joy and a tremendous hope for what is to come in the future, and for the future of ministry in the Archdiocese of Baltimore,” Bishop Parker said as he was whisked to the post-Mass reception.

“I was praying along with the litany,” Bishop Brennan said with a grin while obliging the camera-wielding faithful who had momentarily cornered him and his priest handler. “Lord, have mercy on me. Lord, hear my prayer.”

Close to 2,000 gathered in the cathedral on an unusually sunny and mild January afternoon to witness and take part in the ceremony, led by principal celebrant and consecrator Archbishop William E. Lori, archbishop of Baltimore.

Nearly 2,000 people fill the Cathedral of Mary Our Queen for the Jan. 19 episcopal ordination of Bishop Adam J. Parker and Bishop Mark E. Brennan. (Olivia Obineme/Special to the Review)

The archbishop was joined by co-consecrators Cardinal Donald W. Wuerl, archbishop of Washington, where Bishop Brennan served as a parish priest before his elevation to the episcopacy; and Cardinal Edwin F. O’Brien, grand master of the Equestrian Order of the Holy Sepulcher and archbishop emeritus of Baltimore, whom Bishop Parker had served as priest secretary from 2007 to 2013.Cardinal Timothy M. Dolan, Archbishop of New York, concelebrated the Mass; he had served as rector of the Pontifical North American College in Rome while Bishop Parker studied there from 1995 to 2001. Bishop Brennan also studied at the NAC, from 1970 to 1974.

Archbishop Christophe Pierre, apostolic nuncio to the U.S., read the mandates from Pope Francis authorizing the ordinations, and drew laughter from the pews when he opted to begin with “the older one,” Bishop Brennan, who is 69 to Bishop Parker’s 45.

Bishop Adam J. Parker and Mark E. Brennan prostrate themselves in the sanctuary of the Cathedral of Mary Our Queen in Homeland during the Litany of the Saints at their episcopal ordination Jan. 19. (Kevin J. Parks/CR Staff)

Archbishop Lori also broached the age topic, referring in his homily to the first reading from Jeremiah, read by Sister Maria Luz Ortiz of the Mission Helpers of the Sacred Heart, in which God steamrolls the young prophet’s fretting: “Do not say, ‘I am too young.’ To whomever I send you, you shall go; whatever I command you, you shall speak” (Jer 1:7).“So, Bishop Brennan, let no one take advantage of your youth and inexperience,” the archbishop quipped, adding on a more serious note: “After all, you know, Bishop Brennan and I, we’ve been in priestly ministry a little over 40 years – we go way back.”

Archbishop Lori shared some insight on the role of bishops.

He exhorted Bishop Parker and Bishop Brennan to teach the faith “not as words to be followed but as words of spirit and life that transform us from the inside out and make us bearers of the peace of Christ in a world that is broken, a nation that is divided, and in communities that are in need of healing.”

After promising to uphold the faith and fulfill their duties, and lying prostrate before the altar, Bishop Parker kneeled in reverence as Archbishop Lori laid his hands on his head, a sign of the outpouring of the Holy Spirit, followed by Cardinal Wuerl and Cardinal O’Brien.

The archbishop and the two co-consecrators did the same for Bishop Brennan; then the other bishops present laid their hands on both men.

Ending the Rite of Ordination, Archbishop Lori anointed Bishop Parker and Bishop Brennan with holy chrism and presented each with his Book of the Gospels, episcopal ring, crozier and miter.

“This is the day the Lord has made,” Bishop Parker said in his remarks at the end of Mass. “Let us rejoice and be glad.”

He thanked “the Lord for calling me to the priesthood and now giving me its fullness” as well as the people of the Baltimore Archdiocese for their prayers and “profound encouragement.”

To Archbishop Lori, he said, “There is no way I can adequately express in words how thankful I am to you for ordaining me today.”

Bishop Parker noted that he heard Cardinal O’Brien make similar remarks at his installation as archbishop of Baltimore in 2007.“And finally, I’d like to thank Father Parker – that poor fellow – who is going to be my secretary,” the cardinal had said, according to Bishop Parker.

“You have changed my priesthood forever,” Bishop Parker told him. “Thank you for your guidance and friendship.”

Finally, he thanked his mother, Maureen Parker, who sat in the front row and was first to receive Communion from the new bishop.

“It was from you and Dad I first heard about Jesus Christ,” Bishop Parker told her, also acknowledging his father, George Parker, who died in 2012. “To you I owe gratitude for my life and my faith.”In a previous interview, Maureen Parker told the Catholic Review she was “very happy” for her son.

“Truth be told,” she said, “I had been told a number of times over the years that he would probably be a bishop, but I never knew what to say.”

Bishop Brennan thanked those who came before him in the succession begun with the Apostles.

“We stand today, all of us here, on the shoulders of giants,” he said.

He also acknowledged his parents, both deceased, who had taken him and his brother, Paul, who was present, to Mass and confession.

“They grounded us in the Catholic faith in a very simple and unpretentious way,” he said.

Bishop Brennan also noted that his elevation to the episcopacy was not the first unexpected change in his ministry.

“Cardinal (Theodore E.) McCarrick (archbishop emeritus of Washington) sent me from a nice little parish in northwest Washington … to a huge, multicultural parish, St. Martin of Tours (in Gaithersburg). It opened me up ever more to serving people who speak differently and look differently than I do.”

He also delivered remarks in Spanish and French, primary languages of the immigrants he served at St. Martin.

The ordination Mass took on the flavor of a wedding, the new bishops acting as grooms, “in persona Christi,” to the church, i.e. the bride. It also established a fellowship of Baltimore and Washington priests and parishioners, who mingled like new in-laws at a reception.

Archbishop Lori welcomed the “family of faith” and a diverse congregation that included members of multiple religious orders, including Dominican Sisters of St. Cecilia, who before the Mass roamed the cathedral as a happy pack, grown women with the exuberance of junior high field hockey players, and Missionaries of Charity, who as always strained to be unnoticed while eliciting reverent whispers.

“It’s a blessed day in the archdiocese to have two new bishops,” said Bishop Denis J. Madden, retired auxiliary bishop of Baltimore, after the approximately 50 seminarians, 70 deacons, more than 200 priests and close to 30 prelates had processed out.

“The archdiocese could definitely use the help, especially at this time of going into the pastorates and with the emphasis on evangelization,” he added.

“It was a very moving experience,” he said. “As the ceremony unfolded, it just took on a life of its own thanks to the Holy Spirit.”

Thinking of all the people in the Baltimore Archdiocese thankful for two new leaders to share the work, he said, “I’m at the top of that list.”