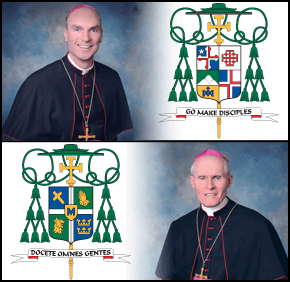 Editor’s Note: Bishops-designate Adam J. Parker and Mark E. Brennan will be ordained auxiliary bishops for the Archdiocese of Baltimore Jan. 19 at the Cathedral of Mary Our Queen in Homeland. This story is part of a series of articles looking at their background and priestly ministry

By Catholic Review Staff
When a priest becomes a bishop, he starts using some additional vestments and signs of his office: an episcopal ring; a crozier, a pastoral staff signifying the bishop’s role as a shepherd; and a miter, a tall, pointed ceremonial cap. Bishops also have a personal coat of arms which denotes their rank and position.
Coats of arms hail from medieval days when the insignia on a shield or on a breastplate identified the knight carrying it. The field of those who create coats of arms for bishops, known as ecclesiastical heraldry, is a small one. Deacon Paul J. Sullivan created the coats of arms for Bishop Adam J. Parker and Bishop Mark E. Brennan, who will be ordained to the episcopate Jan. 19 at the Cathedral of Mary Our Queen in Homeland. Deacon Sullivan is one of only a few in the United States who practice the craft regularly.
“There are some documents that need to be sealed if they are sent to Rome. By printing on letterhead with a coat of arms they are considered ‘sealed,’” the deacon said, which is easier than the old process of using candle wax and a signet ring to place a seal on a document. “It’s a nice fall back on a medieval tradition.”
The coat of arms is made up of three main parts: the shield, which identifies to whom the design belongs; external ornamentation, which tells the owner’s position or rank; and a motto, placed on a scroll.
For diocesan bishops, such as Archbishop William E. Lori, half the shield identifies his diocese and half is a personal coat of arms.
However, “for the bishop who is without jurisdiction, as an auxiliary bishop, the entire shield of his design is given over to his personal arms,” Deacon Sullivan points out.
For bishops, the “external ornamentation” includes a green galero, a wide-brimmed low hat with three rows of tassels. For archbishops, the galero is violet-colored with four rows of tassels and for cardinals, it is red with five rows.
The episcopal herald, the person who designs the coat of arms, also prepares a description (a “blazon”) of the elements used and their significance.
The blazon of the arms uses heraldic terms for metals – “or” for gold, which is often depicted as yellow, and “argent” for silver, depicted in white – and colors, such as “vert” for green and “azure” for blue.
The whole process of creating a new coat of arms for a bishop takes about 40 hours, Deacon Sullivan said, including an initial conversation with the prelate to get to know important details that should be conveyed in the image. Before the advent of email and digital scans, drafts and comments were sent back and forth by mail.
“I have to tell his story the way he wants it told,” the deacon said, adding that it is his job is to make sure it’s esthetically pleasing, conforms to heraldic tradition and conforms to norms of the Holy See.

For Bishop Brennan, the shield is made up of four sections, divided by a cross of the faith. A Latin cross in the upper left quadrant signifies that whatever trials we have in life, there is always another cross that each of us will be asked to carry. Praying hands in the upper right quadrant indicate that all of our lives should be directed to and with prayer.
The lower left features a lion’s head, to honor Bishop Brennan’s baptismal patron, St. Mark. The lower right includes two small crowns, known as diadems, to honor the bishop’s parents, Edward (named for St. Edward the Confessor, King of England) and Regina (which is Latin for ‘queen’). The monogrammed escutcheon (small shield) in the center honors the Blessed Virgin Mary, expressing the bishop’s firm belief that no one will be successful in their religious life without Mary’s help.
Bishop Brennan chose “Docete Omnes Gentes,” a Latin phrase reflecting Christ’s admonition to “teach all nations.”
Bishop Parker’s shield is also divided into four compartments. The upper left contains the Calvert Cross and a silver (white) star (signifying Mary), which are taken from the coat of arms of the Archdiocese of Baltimore, where the bishop grew up and was ordained to the priesthood. The upper right features a Jerusalem cross, which calls to mind the Equestrian Order of the Holy Sepulcher of Jerusalem, of which Bishop Parker is a member. This symbol also honors Cardinal Edwin F. O’Brien, whom Bishop Parker considers a mentor, having served as his secretary in Baltimore and when the cardinal became grand master of the order, based in Rome.

The lower left depicts mountains, a tribute to both the bishop’s affinity for the outdoors, especially mountain hiking, and to his first parish assignment as a priest at St. Peter in Westernport and St. Michael in Frostburg, in the mountains of western Maryland. The Marian monogram on the golden field represents his great affection for his home parish of Our Lady of the Fields in Millersville.
The lower right quadrant is similar to the upper left, but for a different reason. The red, silver (white) and blue quartered cross is the major component of the arms of the Pontifical North American College in Rome, Bishop Parker’s alma mater.
For his motto, Bishop Parker adopted the phrase “Go Make Disciples,” from the end of the Gospel of Matthew (Mt 28:19) where Christ admonishes his disciples to go out into the world, making followers and believers of all men and women.
Deacon Sullivan, who was ordained to the diaconate in 1994, first created an episcopal coat of arms in 1976. “I’ve been doing it for 41 years,” he said. Now retired, he serves as deacon assistant at St. Thomas More/St. Veronica in Narragansett, R.I.
A bishop who is not the ordinary of a diocese, such as an auxiliary bishop, is also assigned a titular see, that is, an ancient diocese that is not a current actual diocese. Bishop Parker has been assigned as titular bishop of Tasaccora; Bishop Mark E. Brennan is the titular bishop of Rusubisir. Both titular sees are in what is now part of modern-day Algeria.

For more coverage of Bishops-elect Parker and Brennan, click here.