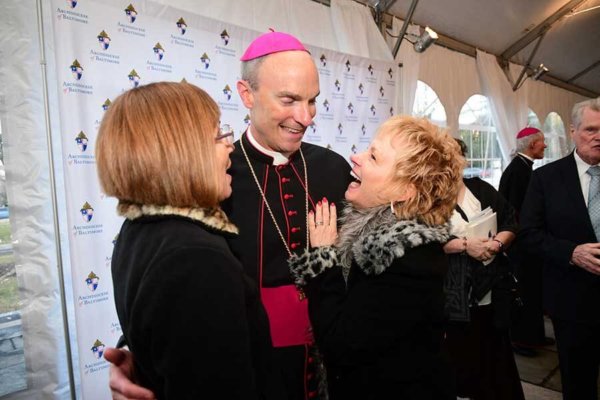 After the recessional hymn faded and after the cardinals, bishops and priests emerged into the mild winter sunshine amid the pealing of the bells of the Cathedral of Mary Our Queen in Homeland, dozens of worshippers began lining up for a chance to greet Baltimore’s two new auxiliary bishops.

Many knew either Bishops Adam J. Parker or Mark E. Brennan and were filled with praise for the new prelates. Others were thrilled to witness a rare liturgical event filled with splendor. As they waited for a chance to meet the bishops, some as much as two hours, they expressed joy, gratitude, affection and, for parishioners of St. Martin of Tours parish in Gaithersburg, a little sadness.

A large contingent of parishioners of St. Martin, where Bishop Brennan had been pastor since 2003, attended the ordination. Though they were thrilled, many said they were sorry to lose their beloved pastor.

“He’ll be a very good teacher to the new priests coming up under him and the people,” said Jim Hill.

“We’re going to miss him,” added Teddy Brennan, a St. Martin parishioner, and no relation to the new bishop. “He is a great asset to the church.”

Fellow parishioners Diane White and Mary Hagen recalled how their pastor spent time getting to know his parishioners, including attending coffees after Sunday Mass and joining parishioners for pizza after First Friday Masses.

“He was always welcoming,” White said.

Deacon Kenneth Barrett remembers when his was one of two African-American families at St. Martin’s. He recalled how the parish changed, adding many more black families and then new immigrant families. The deacon praised Bishop Brennan’s efforts at reaching out to such a diverse population. He noted that the priest, who spoke Spanish, learned French for his families from Togo.

Bishop Parker was pastor of Ascension Parish in Halethorpe only from 2005 to 2007, but left a good impression.

“He is the kindest, most Christ-like authority figure I’ve ever met,” said Cindy Hentz. “He’s the real deal. … We cried when we heard he was going to be a bishop.”

Maggie Noble, also from Ascension Parish, reminded the bishop of a conversation he had with Noble’s husband, Bob, during the sacrament of anointing of the sick. The priest asked Bob Noble to remember him when he met Jesus.

“Look what happened,” she said.

A group of college friends came together to celebrate Bishop Brennan’s elevation. The eight met him when they were graduate students at the University of Maryland. The bishop took part in Catholic student events on the College Park campus while he was director of priestly vocations for the Archdiocese of Washington in the 1990s.

Since then, the friends who remain close include the now-bishop in their invitations to family gatherings and even a recent a student reunion. He’s attended many of them.

Among them were Tina Kent and her husband, Leo Motter, who brought four of their five children to the ordination. Kent said Bishop Brennan had a profound effect on her faith, leading her to be received into the Catholic Church.

“He taught me a lot about Catholicism, the Eucharist and confession,” she said, noting that the bishop presided at their wedding. “He helped me to be open to becoming Catholic.”

Not all their meetings were happy ones, Motter noted. He said he spoke with Bishop Brennan soon after he was diagnosed with multiple sclerosis in 1995. “He helped me work through that,” explaining that the bishop offered him hope while recognizing the seriousness of the news.

“It was exactly what I needed to hear,” Motter said. “He met you where you were.”

“He was a very loving priest,” said Debbie Biesenbach, a parishioner at Our Lady of Mercy in Potomac, where Father Brennan was associate pastor from 1976 to 1981. “He likes to be close to people. I hope in this new role he is still able to do that.”

A number of visitors remembered a young Adam Parker.

Mary James of Centreville recalled when he was a Severna Park High School student working for her father, Jerry James, a career diplomat who owned a small promotion company. She was delighted to attend the liturgy.

“I loved the whole thing,” she said.

Suzanna and Brian Ribblett, who brought their five children to the ordination, are parishioners at the bishop’s home parish, Our Lady of the Fields in Millersville.

“We knew him when he was discerning the call,” Suzanna Ribblett said. “It (the ordination) was something we wanted to show our children. He’s such a holy person.”

Sister Lorraine Maguire was among a group of Little Sisters of the Poor who said she came to “pray for him and with him for his journey in guiding the church. He’ll make a wonderful bishop.”

Not everyone who came knew either Bishop Brennan or Bishop Parker.

Angela Miceli, a parishioner at St. Ursula in Parkville, had never been to a bishop’s ordination. She came at the invitation of Frank and Maggie Bramble, parishioners of St. Pius X in Rodgers Forge and friends through Calvert Hall College High School in Towson, where Bramble was a student and returned to briefly serve as interim president, and Miceli’s husband, Augie, has been a fixture in the math department since the 1960s.

“I was so happy to see this,” Angela Miceli said. “I’ve never been to anything like this.”

Yolly Dougherty and Josephine Garcia had never met either bishop, but when their parish, St. Michael in Frostburg – where the young Father Parker served as associate pastor from 2001 to 2005 – announced it was sending a bus to the ordination, the two women signed up.

Dougherty was thrilled to witness the splendor of the ceremony. “We haven’t seen this in our whole lives,” she said.

Mary Tilghman is a freelance contributor to the Catholic Review who previously served as managing editor, news editor and staff writer for the Review.

A parishioner of St. Ignatius in Baltimore, she and her husband have three adult children. Her first novel, “Divided Loyalties” (Black Rose Writing), a historical novel set in the aftermath of the Battle of Antietam, was published in 2017.