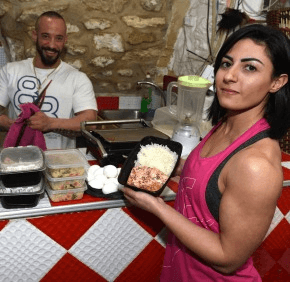 JERUSALEM – In September 2014, Anoush Belian, an English teacher who wanted to lose a few pounds, walked into Basel Said’s Champions Gym in the Christian Quarter of the Old City. Just short of a year later, she was walking off with the Miss Fitness title in her first competition, organized by the National Amateur Body-Builders Association in Israel.
Her coach said Belian, daughter of an Armenian Christian father and a Catholic Palestinian mother, is the first Palestinian or Armenian woman to take up the sport of bodybuilding and reach title level.
“I didn’t start off thinking of going into bodybuilding or going to competitions,” said Belian, 29, at the start of one of her recent daily six-hour training sessions. “I just wanted to get fit, but things took a different turn. I asked Basel for a meal plan, and I started lifting weights – not heavy weights, doing more cardio. I was losing weight and building muscles.”
Belian had played soccer with a girls’ team at the Armenian convent school, so once she got hooked on the training, it was a small step to take it to a higher level.
She was one of a few women who were coming to the gym – the only one in the Old City – in a society that does not look fondly at women taking part in sports or building muscles.
“A lot has to do with genetics, how your body responds,” noted Said, a Christian. “At first sight I could tell (Anoush had potential). She was responding very quickly, and her mind was very dedicated. She did everything I asked her to.”
Said, who holds a professional trainer and nutritionist certificate from the Wingate Institute for Physical Education and Sports, said he wanted propose being Belian’s bodybuilding coach but, afraid that it would scare her off, bided his time until she asked for his help.
Of the three categories available to women bodybuilders, the fitness category is the medium between the more massive muscle-building category and the bikini category.
Said, who has several amateur bodybuilding and weightlifting titles, and Belian have now set their sights on her first international competition: the Columbu Championship in May in Sardinia. Both will compete on the amateur level.
“She is ready. She has everything that it takes,” said Said.
Belian, the middle of three daughters, lives with her mother in the Armenian Quarter; her father died when she was 7. Belian tutors English, which allows her to focus on the sport.
Because of the eating style, long workouts, and different mindset she now has, she has forgone friendships and employment. One thing she has not given up on though, she said, is her faith. Despite the rigorous training schedule, the former choir girl always makes time for Sunday Mass and holiday religious celebrations.
“I go to church, that is something that will not change,” she said. “If you don’t have faith, you don’t have any goal in your life.”
Both she and Said go to pray and light candles at the nearby Church of the Holy Sepulcher. They prayed the Lord’s Prayer, the rosary and a personal prayer and lit a candle before they went to her first competition, she said.
“With all the stress, you need to be strong,” added Said. “This last week we have gone to pray. You need that strength to give that peace.”
As East Jerusalem residents, they both hold Israeli residency status. Though they will be going with the Israeli delegation to Sardinia, Said and Belian will not carry or be photographed with any Israeli symbol or flags, he said. Both said they do not want to represent any political side, they just want to compete.
“I love this sport. I can do it really from my heart,” Belian said. “I enjoy every second. I did not expect to win on my first competition.”
Belian said it has been hard for family and friends to understand her devotion to the sport; some people have told her to go get a job and get married. They look at her differently, she said, and make negative remarks like she is getting too muscular for a woman.
“I say all that will come later. After my win, I showed them why I was spending so much time at the gym,” Belian said. “Some people go to university to study for six years to become a doctor; other people go to the gym to become a bodybuilder. Everyone has their goal in life.”