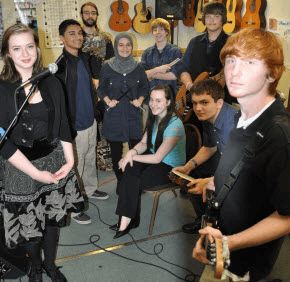 The brainchild of Scott Rose, a parishioner of St. Katharine Drexel and a diaconate aspirant, and his 16-year-old son, Austin, the band began in January as an interfaith outreach of their parish. Its nine members are in high school or college and belong to Catholic, Protestant, Muslim, Jewish and Buddhist congregations in the Frederick area. Austin Rose, 16, is the drummer.

“The band is a vehicle for bridging (the local faith) traditions together,” said Abuhamada, who sees the band as a “beacon for the community.”

A $1,200 grant from the Frederick Community Foundation got the band going by funding a music director, Greg Ross, a teacher at St. John’s Catholic Prep, a high school in Frederick. Band members were handpicked from local congregations for their musical skill, said Scott Rose, who volunteers with St. Katharine’s youth ministry and peace and justice outreach.

The band’s set includes classic and contemporary rock songs, including the Beatles’ “All You Need Is Love” and Matisyahu’s “One Day.” The songs emphasize the religions’ shared values, such as peace, justice and unity, said Melissa Rifkin, 17, who plays keyboard and is Jewish. The band also plays rock versions of songs from the members’ religious traditions, including a song Abuhamada composed from Buddhist chants.

Despite an overall “fruitful” interfaith atmosphere, Frederick has experienced interfaith tension, including some community backlash in nearby Ijamsville over a Muslim speaker at Urbana High School in 2008, as well as vandalism at the local mosque and the Tibetan Meditation Center, Abuhamada said.

Band members view their work as a proactive move beyond standard interfaith conversations.

“I think people hunger for this kind of music and this kind of mission,” Rose said. “There are interfaith organizations that do a lot of dialogue, and I think that’s valuable, but I think this is more valuable, since it’s the symbolism that really is the thing that’s promoting the interfaith respect. These young adults aren’t talking about it, they’re actually doing it.”

True to the band’s charitable mission, it only performs for nonprofits or charity events. The June 3 fundraiser will benefit local nonprofit organizations. The band is playing at St. John’s Regional Catholic School Auditorium, where St. Katharine Drexel parish currently worships, at 7 p.m. A rock band whose members received help from the Frederick Union Rescue Mission will also play. Tickets are $10, and can be purchased at the door or in advance by contacting Scott Rose at (301) 401-8294 or sroselaw@comcast.net.