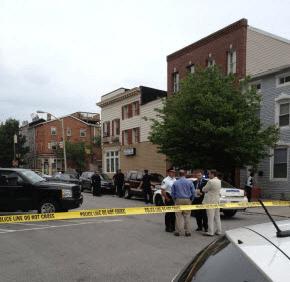 Catholic Review assistant managing editor George P. Matysek Jr.  was walking to his car in the vicinity of Holy Rosary Church and Cristo Rey Jesuit High School, located at 420 S. Chester St. in upper Fells Point, when he saw a man running before being shot by what appeared to be a police officer. The school immediately went into lockdown mode as police arrived to secure the scene, Matysek reported.

A police spokesman said that at 1:10 p.m. police responded to a burglary in progress. They confronted two suspects and one suspect was shot multiple times by the police. The suspect is in critical condition at an area hospital.

Marlen Garcia, parishioner of Sacred Heart of Jesus in Highlandtown and a parent of a Cristo Rey Jesuit student, was walking down the sidewalk and saw a man running out of a house and saw that his arm was  full of blood. She said she immediately ran into the school.

“I was walking to my car and I was in front of Holy Rosary after doing an interview at Cristo Rey, and I heard a shot and saw a guy falling to the ground and it looked like the officer had shot him,” Matysek reported. “I was initally stunned and I ran behind a car and ducked before running back to Cristo Rey. Cristo Rey did a wonderful job securing the building and making sure the students were safe.”

Cristo Rey Jesuit’s status on Facebook reports, “There was a police incident in the neighborhood this afternoon. No student or staff member was involved or affected. We will follow the regular school and work hours. Our security staff will continuously monitor our campus. Please do not pickup your students on Chester Street. Students will be dismissed from the Eastern Avenue side of the school because Chester Street is currently closed. We ask for your prayers for peace in our city. Thank you.”

In a statement to the Catholic Review, Mary Beth Lennon, assistant to the president and director of communications for Cristo Rey Jesuit also added, “We immediately informed our parents and the board of trustees. We are doing all we can to cooperate with the authorities.”