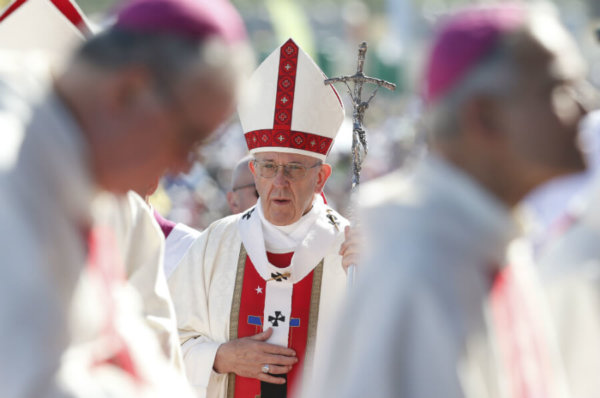 Pope Francis arrives in procession with other bishops during Mass at the Maquehue Airport near Temuco, Chile, Jan. 17. (CNS photo/Paul Haring)

WASHINGTON — Catholic theologians, educators, parishioners and lay leaders across the United States expressed their disgust with the abuse scandal in the church, saying the details in a Pennsylvania grand jury’s report “evince a horror beyond expression.”

“The report summarizes the situation thus: ‘Priests were raping little boys and girls, and the men of God who were responsible for them not only did nothing; they hid it all. For decades,” the group said in an Aug. 15 statement posted on the blog Daily Theology. As of early Aug. 23, it had been signed by more than 4,400 people.

“We are brought to our knees in revulsion and shame by the abominations that these priests committed against innocent children,” said the statement in response to the grand jury report released a daily earlier. The report is based on a months-long investigation of abuse claims over a 70-year span in the dioceses of Pittsburgh, Erie, Greensburg, Harrisburg, Scranton and Allentown. Many of the claims go back decades.

“We are sickened in equal measure by the conspiracy of silence among bishops who exploited victims’ wounds as collateral in self-protection and the preservation of power,” the statement said. “It is clear that it was the complicity of the powerful that allowed this radical evil to flourish with impunity.”

The signers called on all of the U.S. Catholic bishops “to prayerfully and genuinely consider submitting to Pope Francis their collective resignation as a public act of repentance and lamentation before God and God’s people.”

The statement cited how Catholic bishops of Chile submitted to Pope Francis in May following devastating reports of sexual abuse and cover-ups by members of the clergy in that country.

“It should be noted that the active bishop-to-Catholic ratio is almost the same in Chile and the United States, and that the geographical scope of the crisis in this country appears to surpass that of Chile,” the statement said.

“After years of suppressed truth,” it said, “the unreserved decisiveness of the Chilean bishops’ resignations communicated to the faithful a message that Catholics in the United States have yet to hear, with an urgency we have yet to witness: We have caused this devastation. We have allowed it to persist. We submit ourselves to judgment in recompense for what we have done and failed to do.”

Some Catholics, it said, “will feel that the resignation of all bishops is unjustified and even detrimental to the work of healing,” because many bishops “are indeed humble servants and well-intentioned pastors.”

“This is an urge we recognize, but it is not one that we can accept,” it continued. “The catastrophic scale and historical magnitude of the abuse makes clear that this is not a case of ‘a few bad apples’ but rather a radical systemic injustice manifested at every level of the church.”

The statement said bishops offering their resignations would be “a public act of penance and sorrow” by the bishops. “No genuine process of healing and reform can begin” without such a public act, it said.

The signers also said they “wholeheartedly support” the “sound proposals” some have offered for specific reforms that would begin to convert this ecclesial culture of violence into one of transparency, accountability, humility, safety and earned trust.”

They said they agreed with calls for “external investigations of every ecclesiastical province in the United States” like what was just completed in Pennsylvania.

The group did not reference a statement made Aug. 14 in response to the grand jury report’s release by Cardinal Daniel N. DiNardo of Galveston-Houston, president of the U.S. Conference of Catholic Bishops. “As a body of bishops,” he stated, “we are shamed by and sorry for the sins and omissions by Catholic priests and Catholic bishops. We are profoundly saddened each time we hear about the harm caused as a result of abuse, at the hands of a clergyman of any rank.”

Two days later he announced three key goals and a comprehensive plan to address the “moral catastrophe” of the scandal He said the “substantial involvement of the laity” from law enforcement, psychology and other disciplines will be essential to this process.

The first goal, Cardinal DiNardo said, is a “full investigation” into “the questions surrounding” Archbishop Theodore E. McCarrick, who is accused of sexually abusing a minor almost 50 years ago and allegedly sexually harassed seminarians in more recent times; the second and third goals, respectively, are the opening of new and confidential channels for reporting complaints against bishops, and advocacy for more effective resolution of future complaints. Three criteria, he said, will be followed: proper independence, sufficient authority and substantial leadership by laity.”

The signers of the statement posted on dailytheology.org described themselves as active Catholics coming from all walks of life, with many working at various levels of the Catholic Church and Catholics with families:

The statement noted that the grand jury report and its “nauseating clarity” of seven decades of abuse and cover-up “by bishops and others in positions of power” came after the “revelations of decades of sexual predation” allegedly by Archbishop McCarrick and while the church remains “in the long shadow of the sexual abuse crisis in Boston and beyond.”

“Systemic sin cannot be ended through individual goodwill,” the statement said. “Its wounds are not healed through statements, internal investigations, or public relations campaigns but rather through collective accountability, transparency and truth-telling.”

The signers said they “stand in solidarity with the thousands of victims, named and unnamed, whom predatory priests, protected by the willing silence of many bishops, have raped, abused, brainwashed, traumatized and dehumanized.”

They also said, “We grieve for our church,” as well as for students, children, families, parents, grandparents, friends, neighbors and all of those we love who have left or will leave the Church because they have found its leaders unworthy of trust.

“We grieve for our parishes, communities, schools and dioceses,” they said.

One signer is a pediatrician spiritual care provider, another a theological librarian. One describes herself simply as “a lifelong Catholic.” They also include “a father of eight,” “a mother of eight” and “a Catholic school volunteer and parent.”

Many signers included the name of their parish, college or high school for identification purposes, not as representation of the opinion of their institutions, the letter said. Several are from Catholic colleges and universities, such as Fordham, Loyola Chicago, Seton Hall, Barry and Sacred Heart universities, University of Portland, University of Notre Dame, and Boston and Regis colleges.

Editor’s Note: The full statement, in English and Spanish, can be found at https://bit.ly/2BsLqwO.