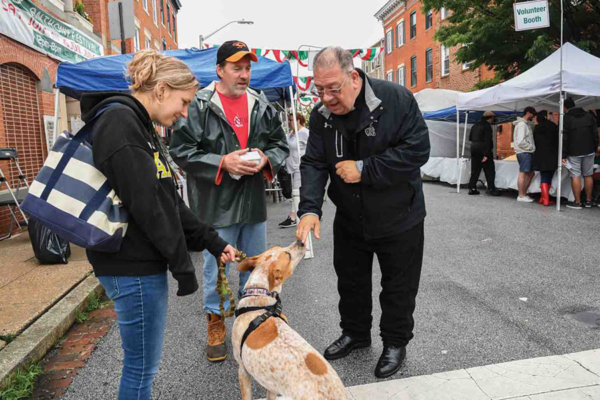 The best word I like to use to describe Pallottine Father Bernie Carman, our St. Leo the Great pastor, is gentle.

I find him to be such a tender and calm soul. He speaks gently. He celebrates Mass gently. He acts gently. I love chatting with Father Bernie – his tranquility is contagious.

During June’s Feast of St. Anthony Italian festival he proved this characteristic after I cut my finger on a tent pole. He led me into the parish office, located the first aid kit, and gently bandaged up my finger. How sweet was that? (Can I get an “awwwwww?”)

In St. Leo’s church, he frequently gestures parts of the Mass in sign language, particularly The Lord’s Prayer … eyes closed … heart open … flowing movements … and seemingly to really feel it. It’s quite lovely to watch.

That he would set up a tent at the Feast of St. Gabriele Italian festival in Little Italy this past weekend and invite in people to “SIT – TALK – PRAY” depicts gentleness in itself. He has no idea what ‘stuff’ he’ll hear or who he’ll encounter sitting across from him. (I suppose that’s similar to a priest in a confessional?)

Yet I bet Father Bernie heard and treated each “customer” with gentleness. I envisioned them carrying away a fragment of his calmness and paying it forward to the next person that day.

Even the ambiance and color under the canopy spoke serenely: his long white vestments, white table and chairs, white sign, white tent and small piles of prayer cards and religious booklets on the table which he offered as “giveaways.”

“I thought what a great innocent way of extending oneself!” said Bernadette Sahm of Lutherville, a festival attendee.

We humans can become so worked up and agitated over the tiniest details. So when someone displays to us kindness, tenderness or peacefulness, it is my hope we absorb it, then move on to the next scenario of the day and offer the same traits to others. If that would happen more, if that could persist day by day, we might all exist in a gentler world.

A world made up of a bunch more Father Bernies.