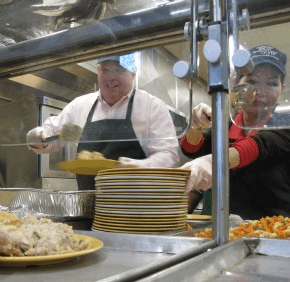 In the midst of his public battle with aggressive lymph node cancer, Gov. Lawrence J. Hogan Jr. received a revitalizing gift in a chance to meet Pope Francis.

The governor met the pope Sept. 24, hours before the pope left Washington for New York, and, with his wife, Yumi, was among those who bid him a fond farewell as he boarded an American Airlines plane at Joint Base Andrews.

“It was an incredible honor to meet His Holiness Pope Francis today in Washington and receive his blessings on behalf of all cancer patients,” Hogan, who is Catholic and a parishioner of Holy Family in Davidsonville, said in a statement.

“My faith, like the faith of countless other patients like me, gives me strength to defeat this disease, and continue to be the best public steward I can be for the people of this great state.”

Hogan added that he was “inspired” by Pope Francis’ words about service he spoke during a Sept. 20 Mass celebrated in Havana.

“He said, ‘Service is never ideological, for we do not serve ideas, we serve people,’” Hogan said. “Working to make people’s lives better is something I can understand and will continue to put to work in my administration as well as my life.”

The governor has been involved with the Archdiocese of Baltimore since he assumed office in January.

In March, he joined the archdiocese in supporting the Maryland Education Credit, a bill which, had it passed, would have allowed businesses donating to nonprofit student assistance organizations to claim a tax credit equal to 60 percent of their donation, up to $200,000.

On May 3, Hogan joined Archbishop Lori at St. Peter Claver in Baltimore’s Sandtown-Winchester neighborhood for a Mass of prayer following the death of Freddie Gray Jr. in police custody and the subsequent unrest.

In mid-August, the governor told media that 95 percent of his cancer was gone after eight weeks of treatment.