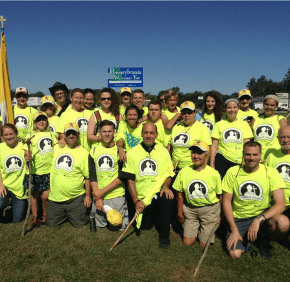 Participants in the "Feet for Francis" pilgrimage pose on the Mason-Dixon line. (Paul McMullen/CR Staff)|

ON THE ROAD TO PHILADELPHIA – Judy Smithson was in distress.

She had just been involved in a nasty fender bender along Route 1, near Darlington. The rear of her auto on the passenger side a crumpled mess, she sat on a rise on the side of the road, comforted by her nephew, Harford County Sheriff Brandon Smithson.

She was in tears as Father John J. Lombardi and 21 other pilgrims came walking from the south. Immediately, Smithson was surrounded by a sea of neon yellow T-shirts offering comfort. Paul and Paula Tiller, parishioners of Father Jack’s at St. Peter in Hancock, sang a hymn.

“My back hurts, but I’m OK,” Smithson said. “Thank you for stopping.”

After being involved in an auto accident Sept. 22 near Darlington, Judy Smithson was comforted by Father John J. Lombardi and Feet for Francis pilgrims. (Paul McMullen/CR Staff)

Proclaim, Celebrate and Help are Father Jack’s three talking points on this Pilgrimage of Love and Mercy, and that Sept. 22 moment was a reversal, as we are the ones on the receiving end of prayer, shelter, support and sustenance.

Halfway to Pope Francis and the Mass he will celebrate in Philadelphia Sept. 27, in a pilgrimage sponsored by the Archdiocese of Baltimore and Catholic Review Media, we have encountered one blessing after another.

Start the morning of Sept. 22, when our exit from Bel Air began with a bagpipe serenade from Andrew McIntyre, a math teacher at The John Carroll School. Amazing Grace, indeed.

It was a short walk to St. Margaret School, where Monsignor Michael Schleupner joined Father Jack as pilgrims processed past the entire student body of the parish school, cheering along Hickory Road.

It leads north to St. Ignatius Hickory, and the oldest church in the archdiocese, one Father Jack could have prayed in for hours, if not for the matter of getting up the road, where lunch awaited. Monsignor James Barker and his staff happily ferried some tired and sore pilgrims by van and car, to an intersection where lunch was being delivered.

It was a gift of St. Patrick in Havre de Grace, led by Rita Cardona, who learned from Father Jack that he had been in seminary with her new pastor, Father Dale Picarella.

The Conowingo Dam ended the day’s hike, which saw a handful of pilgrims cover 16.5 miles. There was stress as we prepared to cross from the east side of Route 1 to the west to the visitor center, where support vans would transport us across the Susquehanna River. Another angel appeared, in the form of Trooper Glenn Henry, assigned to the Bel Air barracks, who stopped traffic as we crossed the road.

Pilgrims found a most warm embrace at St. Agnes in the Cecil County town of Rising Sun.

It began with a fried chicken dinner, courtesy of St. Mary in Pylesville and the Knights of Columbus, Mason-Dixon Council 10100. Father Henry Kunkel and Deacon Phil Seneschal accompanied Knights who had covered a few miles themselves that Sept. 22.

“He came to our meeting and asked if we could help out,” said Jack Smith, past Grand Knight, trustee and Vietnam veteran, who drove more than 30 miles from his home in western Harford County.

St. Agnes is a mission of Good Shepherd Parish in Perryville. We were in good hands in “Bishop Fran” territory, as the Diocese of Wilmington is headed by Bishop W. Francis Malooly, a Baltimore native and former auxiliary bishop for the Archdiocese of Baltimore.

“We see him (Bishop Malooly) a lot,” said Deacon Luke Yackley. “He says Mass at Good Shepherd in Perryville, then goes and visits family in Baltimore.”

Deacon Yackley retired from 31 years with the Veterans Administration, a stint that began as a nurse. He can still do triage, and a line of pilgrims had him look at ailing ankles and knees.

“It’s inflammation for the most part,” he assured. “Go buy some Motrin.”

Males slept in the church at St. Agnes the night of Sept. 22. Breakfast the next morning was prepared by the Good Shepherd community, led by Marilyn and Bill Pare, and fellow retirees, including 85-year-old Jack Scarbath. He grew up in St. Francis of Assisi Parish in Baltimore and led the University of Maryland to football glory, finishing second in the 1952 Heisman Trophy balloting.

Father Jack and a group of pilgrims vanned back to the Conowingo Dam, to resume the approximate 108-mile trek from the Basilica of the National Shrine of the Assumption of the Blessed Virgin Mary to the Benjamin Franklin Parkway in Philadelphia.

That seven-mile stretch brought them right back to St. Agnes, where a homemade Mexican-themed lunch was delivered by Kellie Reynolds, a pastoral associate of St. Stephen in Bradshaw, who lives in Elkton. The effort included Immaculate Conception Parish in Elkton and ice cream donated by Kilby Cream that got rave reviews.

Reynolds also had a bag of shoes ready to deliver to one of the nearly 30 locations in the archdiocese participating in the Feet for Francis shoe drive.

Heading out from St. Agnes to resume a 16-mile day under cloudless skies, we passed early autumn fields that had the kind of color that inspired Van Gogh in Arles. We took an extended break at signs marking the Mason-Dixon Line and a welcome to Pennsylvania.

Mary Bergin, a parishioner of St. Thomas Aquinas in Hampden, is among the pilgrims who have walked every step of the way from Baltimore.

We would be lost without our van support team.

All week Paul Tiller has drove the van donated by St. Ignatius Parish in Baltimore, loaded with duffels, sleeping bags and provisions. His family van was driven Sept. 23 by Pat Hamilton, a parishioner of St. Agnes in Hamilton.

Megan Kinsella Quaranta drove a support van Sept. 22 and 23, going back and forth from St. Mark in Fallston, where she is a youth minister. She ate for two, as she is pregnant, in her second trimester.

Each took two trips ferrying pilgrims from Oxford, Pa., to Chadds Ford, where we are spending the night of Sept. 23 at St. Cornelius Parish, where we got in a buffet line that had already served hundreds of pilgrims from the Diocese of Boise, Idaho, who were heading out to local homes that would host them as we all await the arrival of the Holy Father in Philadelphia.