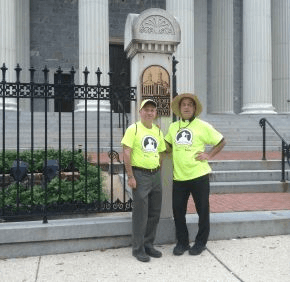 ASTON, Pa. – Early in the Pilgrimage of Love and Mercy, Karen Fiallos proudly took a turn carrying the American flag.

Fiallos is a vital contributor to Sacred Heart Parish in Glyndon, and a small-business owner in Reisterstown. She is also under a deportation order that will force her to return to her native Honduras in June 2016, but has faith that her contributions and continuing character references such as the one she said she has received from her pastor, Monsignor Lloyd Aiken, will allow her to stay in her adopted home.

Fiallos and Egma Liliana Abril have been too busy on the pilgrimage, led by Father John J. Lombardi of St. Peter Hancock and sponsored by the Archdiocese of Baltimore and Catholic Review Media, to follow the repeated statements in support of immigration from Pope Francis – the reason the two walked 16.1 miles from Oxford, Pa., to Kennett Square Sept. 24.

One of the many gentle moments of the pilgrimage has had the walking in tandem, and Fiallos wrapping an arm around the shoulder of Abril, who stands nearly a head taller. Singing and reciting prayers in Spanish, the two have proven to be welcome  representatives of Hispanic Ministry.

Fiallos came to Baltimore in 2001, to find work and support her parents, brothers and sisters back in the Honduran town of Jesus de Otoro. She created Karen’s Cleaning Service, which includes three workers, in addition to herself. She resides with a sister, brother and a daughter, Katherine, a student at Franklin Middle School.

Fiallos and Abril met at Sacred Heart, which has an associate pastor for Hispanic Ministry, Father Hilario Avendaño, two Hispanic Masses on the weekend and several prayer groups, including one led by Fiallos.

Her English is halting, and her story was translated by Abril, a native of Bogota, Colombia, whose own parents fled the drug cartels in 1999. She was working as a flight attendant and living with two sisters, until the violence became too much and she moved to the U.S.

Abril is married to John F. Jimenez, who made an emergency run to deliver a pillow and a few more moments with her ailing Yorkie Terrier, Jane, on Loch Raven Boulevard Sept. 20, the first day of a 108-mile trek from the Basilica of the National Shrine of the Assumption of the Blessed Virgin Mary to the Sept. 27 papal Mass in Philadelphia.

The “Feet for Francis” pilgrims awoke Sept. 24 at St. Cornelius Parish in Chadds Ford, Pa., and had to van back to Oxford, the end point of the previous day’s walk.

They piled in the backseat of a rental car driven by Patricia M. Guerra, a researcher for the NBC Nightly News with Lester Holt, who gathered video and interviews of the pilgrimage for an upcoming broadcast. Guerra was born in Mexico herself, and educated in Catholic institutions, and the three had plenty to talk about – all in Spanish.

Asked earlier why they are walking, Fiallos said, “For my soul, and because I love God. I can sacrifice for too many people who are suffering.”

To the same question, Abril said, “I love God. I want to learn and experience things I’ve never done before. To grow my faith; how can I help others?

“And to learn how to forgive.”