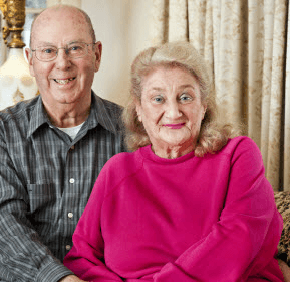 By Elizabeth Lowe
elowe@CatholicReview.org
HALETHORPE – Richard and Antoinette Phillips sat on a couch in their living room – her feet not quite touching the floor – completing each other’s sentences and gazing adoringly at each another, even after 60 years of marriage.
“I call him my rock,” Antoinette said of her husband, Richard.
Smiling fondly at Antoinette, Richard said, “I’ve been a very fortunate person to have her as a wife.”
Parishioners of Church of the Ascension in Halethorpe, the Phillips’ attribute the longevity of their marriage to their faith and spending time together.
“We’re devoted to God first, then family,” Richard said.
Antoinette agreed.
“We don’t do nothing without God,” she said. “A husband and wife should always do things together.”
Other advice includes compromising and never going to bed angry at one another.
“You’ve got to make up,” Richard said. “Nobody is the boss here. We work together. We don’t use filthy language.”
The Phillips are both 80, though Antoinette is quick to point out she’s five months older. They have one son and three grandchildren, ages 17 to 23.
Richard and Antoinette grew up in the same West Baltimore neighborhood and met at age 15. Both attended Catholic schools in the city.
Richard was drawn to Antoinette’s “beautiful blue eyes.”
“She was beautiful then,” he said, “and she’s beautiful now.”
After a four-year courtship, Richard and Antoinette did not tell anyone of their plans to marry. They married on Dec. 31, 1952, at the Basilica of the National Shrine of the Assumption of the Blessed Virgin Mary in Baltimore. They were 19.
“Our love has been faith-based from day one,” Richard said. “Our marriage had the foundation of the Catholic faith.”
Their home is filled with visible signs of their faith, including religious statues, photos and small crucifixes hung above every door frame.
“When I enter, I feel that God goes with me through,” said Antoinette, who has spent her life as a homemaker.
“It’s 24 hours a day,” Richard said. “I wouldn’t want to be a housewife.”
Richard was honorably discharged as an airman first class from the U.S. Air Force in 1956 after four years of service. He then worked for the Baltimore City Fire Department for 29 years.
“I loved it,” he said. “I was doing some good for people. I delivered 39 children and saved several lives.”
Now, Richard works two days each week at an automobile auction in Elkridge.
“I think it’s good for both of us,” he said.
The Phillips’ reiterated how important time together is.
“Togetherness,” Richard said. “There is time for everything.”
Also see:
Before mortal remains of St. Valentine, couples pledge unending love
Copyright (c) Feb. 14, 2013 CatholicReview.org
PrevNext