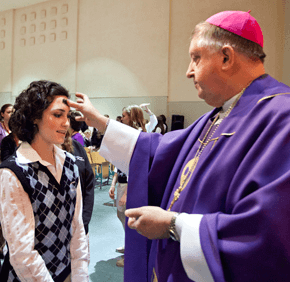 By Elizabeth Lowe
elowe@CatholicReview.org
Twitter: @ReviewLowe
During an Ash Wednesday Mass, Baltimore Archbishop William E. Lori spoke about Pope Benedict XVI’s historic decision to resign and how “we should appreciate his humanity and his humility.”
“His example of deep and loving trust, his abiding pastoral love, all of this is instructive to us as we begin this time of Lent,” Archbishop Lori said during his homily Feb. 13 at the Shrine of St. Alphonsus in Baltimore.
Ash Wednesday begins Lent, a 40-day period of preparation and a penitential season leading up to Easter Sunday.
These 40 days afford believers the opportunity to grow deeper in faith.
The faithful receive ashes on their foreheads on Ash Wednesday, symbolizing mortality and a call to turn away from sin.
“Lent is a time of conversion,” Archbishop Lori said. “It’s a time to turn our minds and hearts away from sin, away from self-centeredness, and to turn our minds and hearts toward Christ and toward his love. It’s a moment for you and me to encounter Christ in the depth of our hearts, in that inner room we call our conscience.”
During Lent, there are people preparing to enter the church on Holy Saturday at the Easter Vigil.
“We should pray for those who are becoming a part of our family of faith and we should also pray for those who have stopped practicing their faith,” Archbishop Lori said. “Let us pray that we might observe Lent well, that we might make our Lenten observance something that we pursue seriously, day by day.”
Archbishop Lori highlighted the archdiocesan campaign “The Light is on for You.” Catholics can go to any Catholic parish in the archdiocese for the sacrament of reconciliation every Wednesday, Feb. 20-March 20, 7-8:30 p.m. Other times may be available at individual parishes.
“Any day is a good day to receive the sacrament of penance, but Lent is an especially good time to make an unburdening confession of our sins,” he said.
Heidi Toll, a parishioner of St. Augustine in Elkridge who attended Mass Feb. 13 at St. Alphonsus, described Lent as “a time to prepare.”
She plans to give up chocolate and attend Stations of the Cross during Lent.
On Ash Wednesday and Fridays during Lent, Catholics ages 14 and older are obliged to abstain from meat. On Ash Wednesday and Good Friday, those 18-59 should fast, which means taking one full meal (or two smaller meals not to exceed one meal) and only liquids between meals. The size of the full meal or the two smaller meals depends on the individual’s physical needs. If someone’s health may be seriously affected by abstaining or fasting, he or she is excused from the obligation.
Rather than purchase ashes, parishioners of St. Gabriel Parish in Woodlawn brought their palms from last year to church, which were burned at weekend Masses Feb. 9-10. The ashes were used Ash Wednesday.
“A lot of people don’t know what to do with it (old palms),” said Monsignor Thomas L. Phillips, pastor of St. Gabriel. “They’re afraid to throw it away because it’s blessed.”
This 15-year tradition at St. Gabriel reminds people where ashes originate, said Monsignor Phillips, who added “I know people wonder where ashes come from. I try to find meaning in all things that we do.”
Auxiliary Bishops Denis J. Madden and Mitchell T. Rozanski celebrated Ash Wednesday Masses at Archbishop Curley High School in Baltimore and Archbishop Spalding High School in Severn, respectively.
Also see:
Lent is a season of penance and renewal
Copyright (c) Feb. 13, 2013 CatholicReview.org
PrevNext