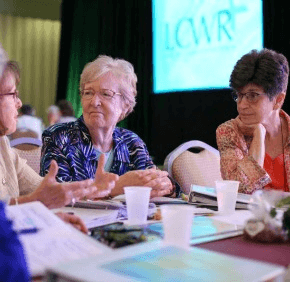 ATLANTA  – Two keynote speakers spoke to attendees at the Leadership Conference of Women Religious assembly in Atlanta about keeping grounded and the mystery found in a changing world.
Sister Pat Farrell, of the Franciscan Sisters of Dubuque, Iowa, an LCWR past president, spoke of centering religious life leadership in contemplation.
Margaret Wheatley, author and management consultant, urged members to push back against a current of reactive thinking.
The Aug. 9-12 assembly drew nearly 800 participants under the theme of “Embracing the Mystery: Living Transformation.” All of the speakers pointed to the need for contemplative engagement with the struggles and sufferings of the world.
In her Aug. 11 keynote, Sister Pat said that on a personal level, contemplation is “transformative” and on a communal level it is “transformational leadership.”
She spoke of centering religious life leadership in contemplation, describing contemplation as “a response to the movement of Spirit that has been stirring in and among us for some time now, becoming increasingly manifest.”
“Where this contemplative impulse might be leading is less obvious. What will be the long-term effect of reclaiming and deepening the contemplative dimension of religious life, of exploring emerging consciousness?” asked Sister Pat.
She said when she was given “the gift of time and space for contemplation,” she “found it transformative.”
“I knew that it was not for myself alone, like some private spiritual fitness program for personal enlightenment,” Sister Pat said. “What emerges in any one of us comes as gift from beyond, as leaven given to transform the whole, and in fact has the power to do that.”
Women religious “can only create their future together,” Sister Pat said, “and there is urgent need to be able to sense what is emerging in the group.”
“Communal discernment of some kind has always been part of the dynamic of religious life but there is a new urgency now to deepen our capacity to hear and follow the guidance of collective wisdom,” she continued. “The learnings and processes arising from within congregations and through LCWR are both a gift given to us and a call. The future is drawing us beyond the personal toward communal transformation.”
Congregations are “facing critical situations that call for long-range planning for structural, organizational, financial and logistical issues,” Sister Pat said.
Today’s “task-oriented culture makes it easier for many people to deal first with the more concrete and tangible realities,” she said.
But to enable members “to speak together from a contemplative depth,” there must be a focus on what is less tangible, that is creating processes and designs “that tend the inner collective life of the congregation,” Sister Pat said.
“It can be challenging to create spaciousness around leadership tasks that involve tension and complex decision making in order to allow deeper access to the wisdom that is needed,” she said.
The contemplative dialogue process promoted by LCWR is “critically helpful,” Sister Pat said.
“It takes intention and focus to speak together from a deeper source, out of a place of peace, to harvest the wisdom of the whole,” she said. “We are learning together to create a culture among us of deep listening and dialogue.”
In her address Aug. 10, Wheatley told the assembly: “We are living in a time of constant reactivity. I can say confidently, thinking has disappeared from leadership. Reactivity is at an all-time high.
“The feedback from leaders is ‘Tell me what to do, I don’t have time to think.’ That’s offered as a legitimate excuse. It’s OK to say, I am no longer thinking, I am just doing stuff.”
Taking the time to consider choices and contemplation is not withdrawing from the world, she noted. Instead, it shows wisdom, she said, instead of reacting to crisis after crisis.
“One person called us ‘future eaters.’ We are eating the future by our unwillingness to use our great human capacity to put thought, and reflection, and contemplation, and working with mystery, which then does provide us solutions, right action. We know what to do.”
The history of Christian women mystics shows an experience of clarity, rapture and complete confidence found in prayer, she said, encouraging her listeners to deepen their prayer life.
“We are not going to solve the overwhelming terrifying moments of this time. They have their own momentum. That is not a depressing statement for me any longer,” she said.
Religious woman live a vowed life, which is their strength in times of turmoil, she said.
Quoting Trappist monk Thomas Merton, Wheatley said, “We are called to this work by God. We are only being used by God, and who knows about the results.”
“In order to be the people who can be the presence of God, the presence of spirit, the presence of peace, we have to take prayer very seriously, we have to take surrender as the path, and we have to take contemplation and reflection and contemplative prayer as the means to go deeper and deeper into this surrender to mystery. And that leads to an incredibly blessed life,” she said.
During the assembly, held at the Hilton Atlanta, the 2016 Outstanding Leadership Award was given to Sister Janice Bader, who served for eight years as executive director of the National Religious Retirement Office and is now president of her community, the Sisters of the Most Precious Blood.
Sister Mary Pellegrino, congregation moderator of the Sisters of St. Joseph of Baden, Pennsylvania, assumed the office of LCWR president for 2016-2017. Sister Teresa Maya, congregation leader of the Sisters of Charity of the Incarnate Word in San Antonio, was voted in as president-elect. The LCWR has a three-member governing body of president, past president and president-elect.