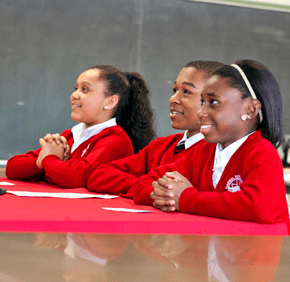 By Elizabeth Lowe
elowe@CatholicReview.org
Twitter: @ReviewLowe
Shortly before noon March 11, Tony Harrison and eight of his peers sat quietly at two tables at Cardinal Shehan School in Northwood, many with their hands folded, anxiously waiting for a Web chat with Baltimore Archbishop William E. Lori to begin.
Students from Cardinal Shehan were among those from about 15 Archdiocese of Baltimore Catholic elementary and middle schools who participated in a 45-minute Web chat with Archbishop Lori about the papal conclave that begins March 12 and will culminate in the election of a new pope.
Archbishop Lori gave the students an overview of the conclave, including its history, where it occurs and how it works, and then answered one question from each school.
When the archbishop asked Cardinal Shehan for its question, Tony, an eighth-grader, asked if there has ever been an African pope. Tony, who is black, was excited to learn there have been three African popes over the centuries.
Other questions included the last time someone other than a cardinal was elected pope (1378), if a cardinal has ever declined the papacy (Konrad von Urach did in 1227) and where the cardinals reside during the conclave (St. Martha’s House in Vatican City).
At the end of the Web chat, Archbishop Lori joked that he felt like TV journalist Larry King. On a serious note, he asked students to pray.
After the Web chat, Tony said he was nervous to ask Archbishop Lori the question, but “it was pretty cool. It’s not something you get to do every day.”
Tony noted he was impressed by the archbishop’s knowledge of the Catholic Church’s history.
TaLeakca Yates, a seventh-grader at Cardinal Shehan, described the experience as “a surreal moment with Archbishop Lori.”
She enjoyed the Web chat and described the archbishop as “really cool” and said “he seemed down to earth.”
Corinne Davidson, assistant principal at Cardinal Shehan, said the experience was “a great way to blend the archdiocese – we’re separated by many miles. It really broadens their (students’) experiences.”
Davidson said it was important for students to see the archbishop in a different setting.
“They got to see he’s just a human being,” said Davidson, noting that questions were submitted in advance of the web chat. “This made him very normal to the children. He seemed to be able to relate to them.”
Did you know about the conclave:
Where: Sistine Chapel, Vatican City
Where ballots go: For the past 300 years, into a 25-inch chalice
Votes needed: Two-thirds majority
Year of the first conclave: 1268
Number of cardinals at first conclave: 18
Number of cardinals at the 2013 conclave: 115
Source: Archdiocese of Baltimore
Also see:
Archbishop Lori’s Prayer for the Church for the vacancy of the See of St. Peter
In digital age, Vatican sticks with smoke, bells to announce results
Copyright (c) March 12, 2013 CatholicReview.org
PrevNext