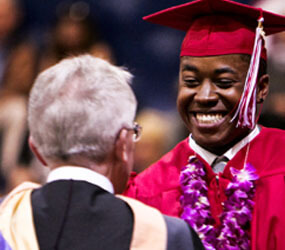 WASHINGTON – In brochures and online materials, Catholic high schools often boast of the high percentage of their students who graduate and attend college – often in the 90-100 percent range. According to a new study, this is not just happening at some Catholic high schools but is part of a nationwide trend.

The report by the National Catholic Educational Association shows that students who attend Catholic high schools are more likely to graduate and attend college than students attending other schools.

The figures are from the Annual Statistical Report on Schools, Enrollment and Staffing, United States Catholic Elementary and Secondary Schools 2009-2010, recently released by the NCEA. Data for this analysis came from several publications of the U.S. Department of Education’s National Center for Education Statistics, as well as information collected by the NCEA.

“Catholic high schools have a remarkable record of graduating their students and preparing them well for post-secondary education,” she said. “Their effectiveness in educating students, even from disadvantaged backgrounds, has been cited consistently in research published over the last 25 years. The Catholic community can be very proud of their support for such schools.”

The recently published book, “The Death and Life of the Great American School System” by Diane Ravitch, also credits Catholic schools for their successful graduation and college attendance rates.

An April 30 article about her book in The New York Times said Ravitch’s views about public schools are influenced by her “long study of and admiration for Roman Catholic education, especially in serving low-income black and Hispanic students.”

In Ravitch’s view, Catholic schools serve as a model because they “never gave over to the obsession with standardized tests” and “never conceded their curriculum to progressive trends like whole language, constructivist math and relativistic history.”

“As a result,” she added, “black and Hispanic students in Catholic schools did not necessarily score higher than those in public schools on standardized tests like the SAT, but they were far more likely to take rigorous classes, graduate on time and attend college.”