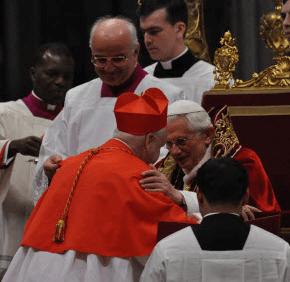 editor@CatholicReview.org
The resignation of Pope Benedict XVI from the papacy is “a courageous act, made out of love for the church, and a desire to see a strong church,” Cardinal Edwin F. O’Brien said a few hours after being with the pope when he made the announcement Feb. 11. He predicted the church could have a new pope by Easter.
The pope came to the realization that the work of the church needed someone with physical and emotional strength, the cardinal told the Catholic Review in an interview by phone from his office in Rome.
“It’s a great sacrifice for him to take this initiative, but a relief for him in the sense that he knows the church will be in the hands of someone stronger.”
In his announcement, on the occasion of an ordinary public consistory to approve the canonization of new saints, Pope Benedict said, “I have come to the certainty that my strengths, due to an advanced age, are no longer suited to an adequate exercise of the Petrine ministry.”
Cardinal O’Brien, who is grand master of the Equestrian Order of the Holy Sepulcher and archbishop emeritus of Baltimore, was present at the time. He said the pope “dropped a bombshell” when he made a statement in Latin that he was renouncing the papacy effective Feb. 28, shocking the 50 cardinals present.
In a statement released from Rome, the cardinal said, “The pope’s announcement is sad news not only for Catholics but for people of all faiths throughout the world. A staunch defender of human rights and those religiously persecuted, and a champion for the dignity of all people, the Holy Father has offered a much-needed voice for morality and good in a world where both are far too scarce.”
In the interview, he noted that Benedict XVI dealt forthrightly with crises in our church and in the United States, including the sexual abuse of children, during a troubled time in the church.
He said the pope set a firm course for the church theologically and liturgically, and was more open than pundits thought he would be, especially ecumenically.
One of the lasting elements of his papacy was his appeal to young people, highlighted by audiences in Rome and around the world, including World Youth Day events, which were filled with young people.
“He has a special charm – a shyness, humility and sensitivity – that shines through. That has been communicated on visits to many parts of the world,” the cardinal said. For example, he noted, many people suggested that Pope Benedict would not do well on his 2010 visit to England, and that he would not be welcome there, but that visit was a success.

Cardinal O’Brien said the details of the pope’s life after Feb. 28 are not clear, but that he will live a contemplative life of prayer and reflection within the Vatican.
“There’s a convent within the Vatican,” Cardinal O’Brien said, “that Blessed John Paul II established of cloistered nuns. Their purpose is to pray for the church and the Holy Father,” and the pope will live there.
“Certainly he’s failed physically in the last year,” the cardinal continued. “We all know why he did it; he explained it well enough.”
Relieved of the burdens of office, the pope may have more time for reflection and writing.
Cardinal O’Brien was “not at all” expecting to be participating so soon in a conclave to elect a new pope. “It’s a great surprise and a great opportunity to do some prayerful preparation,” he said.
He said that it is likely a conclave will be convened in early March. After the pope officially leaves the papacy, those responsible for organizing the election will call the world’s cardinals to Rome. There will not be the traditional eight days of mourning for a deceased pope, so the work will begin with a day or two of talks on the state of the church before entering the conclave.
“By Easter we should have a new pope,” he said, adding that Pope Benedict probably will not participate in the installation of his successor. “I think he will really just step off the stage.”
According to the Vatican Information Service, Jesuit Father Federico Lombardi, the director of the Holy See’s Press Office, confirmed this timeline, explaining that the pope “will move to Castel Gandolfo on Feb. 28, and, once he has finished the tasks he has in progress, he will take up residence in the former cloistered monastery in the Vatican. The process for the election of a new pope will begin March 1. … Thus, in two weeks, during the month of March, in time for Easter, we will have a new pope.”
Easter falls on March 31 this year, and Holy Week begins with Passion Sunday March 24, so it is likely the new pontiff will celebrate the traditional Holy Week activities in Rome.
“Benedict XVI,” Father Lombardi said, “will have no role in next March’s conclave, nor in the running of the church during the time between popes, the time of Sede Vacante. The Apostolic Constitution gives no role in this transition to a pope who resigns.”
Also see:
Archbishop Lori reflects on Pope Benedict’s legacy
Citing health reasons, Pope Benedict announces he will resign
Text of Pope Benedict XVI’s resignation announcement
Copyright (c) Feb. 11, 2013 CatholicReview.org
PrevNext