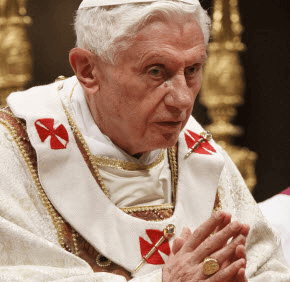 Whether it was from a distance at World Youth Day, or personally receiving the holy Eucharist from him, Catholics in the Archdiocese of Baltimore have fond memories of encountering Pope Benedict XVI, who shocked the world Feb. 11 by announcing his resignation.

Dozens from the archdiocese made the pilgrimage to Rome in February 2012, for the consistory of Cardinal Edwin F. O’Brien, who was transitioning from archbishop of Baltimore to grand master of the Equestrian Order of the Holy Sepulcher.

Among them were Joseph and Dolores Orlando, parishioners of Immaculate Conception Parish, Towson. Joseph Orlando estimates that they were seated 100 feet from the pope when the pontiff formally welcomed the archbishop emeritus of Baltimore into the College of Cardinals last Feb. 18 at St. Peter’s Basilica.

“You see him (Pope Benedict XVI) look directly into the eyes of the person he is elevating to cardinal with total trust,” Mrs. Orlando said, “that this person can be his successor, if need be. He is embracing everything that person stands for.”

The next day, the pope gathered with the new cardinals for a Mass of Thanksgiving at St. Peter’s Basilica. Cardinal O’Brien surprised two members of the All Saints Sisters of the Poor in Catonsville, who had come into full communion with the Catholic Church in 2009, with the honor of receiving holy Communion from the pope.

“Upon receiving my Communion,” said Mother Emily Ann Lindsay, “I was aware of how tired he appeared, except for his eyes. His eyes were bright, steady and piercing. For those few seconds, I felt as though he could see my very soul. I remember thinking how incredible it was, that as a former Anglican, here I was receiving my Communion from the Vicar of Christ.”

Many younger Catholics in the archdiocese followed Pope Benedict XVI to World Youth Days, in Madrid, Spain, in 2011, and in Sydney, Australia, in 2008.

Katie Bechtel, a parishioner of St. Ann, Hagerstown, and senior at Indiana University of Pennsylvania, remembers contrasting experiences at those World Youth Days.

“In Australia, I saw the pope for about 10 seconds,” she said. “We waited all day, and I was a little upset. Everyone was comparing their pictures and all I had was a blurry image. Later, I realized I was lucky to be there and maybe I didn’t need to see him in person to understand God’s love.

“In Spain, when the pope drove by me, I put down my camera and just took in the moment. He zoomed by us so fast, if you had blinked you would have missed him, but his presence was so strong. It was like the wind of the Holy Spirit brushing across our faces as he flew by.”

At an evening vigil in Madrid, Bechtel was among a trio of archdiocesan representatives to be seated 30 rows from the altar stage.

“It was pouring down rain, and I was covered in mud,” she said. “The moment Pope Benedict stepped on the stage the crowd roared. The officials recommended that he leave (because of the weather), but when he tapped on the microphone to speak you could hear a pin drop. He said ‘Youth! I am here with you! He (God) is here with us.’ Those words will stick with me forever.”

Bob Bechtel, her father, served as an archdiocesan chaperone for each of the last two World Youth Days.

“I remember the effect he had on the youth,” Bechtel said. “It was as if the Holy Spirit was there. Even if it was from 100 or 200 yards, it was phenomenal to see the leader of our church. He picked right up where (Pope) John Paul II left off with our youths.”

Hundreds of archdiocesan youths were at Nationals Park in Washington, D.C. in April 2008, when Pope Benedict XVI celebrated Mass during his final visit to the United States.

Concelebrants included Father Michael A. DeAscanis, now the vocations director for the archdiocese. He first met the pontiff when then-Cardinal Joseph Ratzinger was interacting with seminarians at the Pontifical North American College.

Father DeAscanis was a seminarian there when he was an altar server for a Mass celebrated by then-Cardinal Ratzinger at St. Peter’s Basilica.

“He spoke with us, a very natural, friendly conversation in the sacristy after Mass,” Father DeAscanis said. “We thanked him for his work for the church and asked for his autograph.

“He’s very approachable. You don’t feel intimidated and he speaks with a gentle tone, but at the same time you know he has a tremendous mind and a very deep life of prayer.”

Father DeAscanis was still in Rome in 2005, when Pope John Paul II died, Pope Benedict XVI was elected and celebrated his first Mass as pope.

“When he (Pope Benedict XVI) first came out to the altar,” Father DeAscanis said, “he paused and just did a very friendly greeting and waving of his hands to a huge congregation.”

Monsignor Stuart W. Swetland, the vice president for Catholic Identity and Mission at Mount St. Mary’s University and Seminary in Emmitsburg, met then-Cardinal Ratzinger in the summer of 1990 in Rome. Monsignor Swetland worked as an administrative assistant to the editor of the Catechism of the Catholic Church, who answered to Cardinal Ratzinger.

The pontiff-to-be regularly dined with staff members, including Monsignor Swetland, then a transitional deacon.

“He was equally committed and as animated when he talked with us as anyone else,” Monsignor Swetland said. “He’s obviously known as a scholar and a leader. First, he’ll be known as a teacher.”

Carolyn Woo, the president of Baltimore-based Catholic Relief Services, met the pope in Rome a few weeks ago, at a gathering of the Pontifical Council Cor Unum, the Vatican’s charitable arm.

“I was overwhelmed with how he radiated the love of God,” Woo said in a CRS statement. “He has been an inspiration to Catholic Relief Services, especially in how he had repeatedly stressed that our faith is inextricably linked to charity and social justice.”

Non-Catholics were equally inspired by the pope, among them Thomas Kiefer, a distant relative of St. Mary MacKillop, the first Australian-born saint. He was among a group of local pilgrims who were in St. Peter Square for her October 2010 canonization.

“Thousands of us were pulled in by Pope Benedict’s presence, charisma and leadership,” said Kiefer, the chief of Baltimore County’s Bureau of Utilities. “He touched all faiths. We were awed, inspired and left with such energy.”