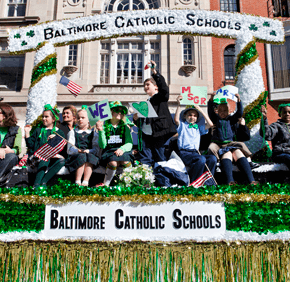 By Catholic Review Staff
Thousands of Baltimoreans turned out on a sunny day to honor a saint and celebrate all things Irish during the 58th-annual St. Patrick’s Parade, held March 10 in the city.
Archbishop William E. Lori kicked off the festivities with a morning Mass in honor of St. Patrick, celebrated at the Basilica of the National Shrine of the Assumption of the Blessed Virgin Mary. The archbishop was later accompanied by Noble, his golden retriever, standing outside the archbishop’s basilica residence to watch the colorful parade make its way down Charles Street in Mount Vernon and onto Pratt Street near the Inner Harbor.
To view a slideshow, navigate the arrows below. Purchase photos from this event by clicking here.
Dan Layden served as the parade’s grand marshal and the Little Sisters of the Poor were the honorary grand marshals. Standing on a float, a man dressed in flowing robes and wearing a miter played the part of St. Patrick – carrying a crosier in one hand and waving to crowds with the other.
Many Catholic school students marched in the parade, as did several priests from the archdiocese, marching bands and dance groups. Father John “Jack” Ward, pastor of Prince of Peace in Edgewood and chaplain of the Friendly Sons of St. Patrick and the Hibernian Society, was the master of ceremonies – announcing parade participants from a reviewing stand where Gov. Martin J. O’Malley was among the dignitaries.
March 12, 2013 CathoilcReview.org
PrevNext