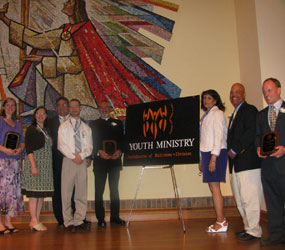 When staff members of the Archdiocese of Baltimore’s Division of Youth and Young Adult Ministry put calls out to people they wanted to honor at its annual recognition celebration April 22, the responses were universally humble.

Told he was going to be given a Youth and Young Adult Medal of Honor at St. Louis in Clarksville, Maryvale Preparatory School’s service coordinator, Michael Vogrin, thought it was a practical joke.

Remembered Scott Miller, acting director of the division: “He responded humbly with this question, ‘Why me?’

Miller said it was a recurring theme among all those who were told they would be honored.

“The reasons for the people receiving awards tonight are as numerous as the stars in the sky,’ Miller said. “They’re devoted and humble servants to Christ.”

Monsignor John A. Dietzenbach celebrated a preceding Mass, filling in for retired Bishop William C. Newman, who was attending the Office for the Dead for Archbishop William D. Borders. During his homily, Monsignor Dietzenbach said those serving in ministry have a great calling.

“The meaning of life for us might very well be that we are called to reflect light where there is no light,” said the pastor of the Church of the Resurrection in Ellicott City. “If we shine light where there is darkness, we’ve changed a person. If we can show them the light of Christ, that person is changed.”

Vogrin was honored with the medal along with Colleen Sisolak, youth minister of St. John the Evangelist in Hydes and Monsignor Nicholas P. Amato, pastor of Our Lady of Grace in Parkton.

It is the highest award the Division of Youth and Young Adult Ministry can give and highlights a person’s service and commitment.

Miller said the award is presented yearly to “adults who model Gospel values and witness a commitment to faith and to the Catholic Church.”

The award has been presented in the Archdiocese of Baltimore and across the country since 1955. President John F. Kennedy received the award weeks before his death.

Several volunteers were honored for their contributions to youths following Mass in the church as well.