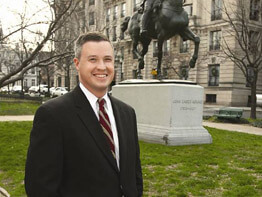 When Peter O’Malley walked into Donna’s Café & Coffee Bar in Mount Vernon on a recent afternoon, the staff was immediately thunderstruck by the 36-year-old’s startling resemblance to his brother, Gov.-elect Martin O’Malley.

The Mount Washington resident and Cathedral of Mary Our Queen, Homeland, parishioner and the 43-year-old future governor share the same megawatt smile.

The brothers are also both law-school graduates married to attorneys who have immersed themselves in political campaigns and local government.

But, insists Peter O’Malley, who will become Baltimore County Executive Jim Smith’s chief of staff Jan. 2, that is where the similarities cease.

While the governor-elect is gregarious, poetic and bursting with political ambition, Peter O’Malley’s personality reveals a more to-the-point introvert who prefers to work behind the scenes.

“I have no political aspirations,” Mr. O’Malley said emphatically. “I may not be interested in elected office, but I do love local government. To me, there is nothing better than to help make it run better so it can be of use to the people who live in that area. That is where I’m most comfortable. That is where I think my talents are.”

The husband and father of two daughters is looking forward to flexing his governmental muscles in a venue removed from the shadow of his most famous sibling when he assumes his new role, paying an annual salary of $110,000.

When Mr. Smith’s current chief of staff, Ann Beegle, announced her resignation, Mr. O’Malley was the only person the Baltimore County executive considered to fill the vacancy.

Mr. Smith, a fellow Democrat and parishioner of Sacred Heart, Glyndon, has had close political ties to the future governor and has been credited with helping the governor-elect garner better-than-expected returns in Baltimore County in the November general election.

“There are a lot of family connections,” Mr. Smith said. “But, I was most impressed with his (Peter O’Malley’s) work at City Hall.”

He is referring to CitiStat, a program the younger Mr. O’Malley helped launch with a grant from the Abell Foundation that uses statistics to improve government services.

In recent years, Mr. O’Malley has served as a management and accountability consultant to local governments and managed his brother’s campaigns for a failed 1990 state senate bid and both Baltimore mayoral wins. He also played a small role in Mr. Smith’s 2002 election and served on his transition team after winning the Baltimore County executive post.

In addition to overseeing constituent services and managing Mr. Smith’s schedule, Mr. O’Malley will be responsible for examining the efficiency of all county departments.

“Peter is going to be involved with studying each department,” Mr. Smith said, “and see where we need restructuring to make them more efficient.”

“Peter has a gift for improving organizations and getting people to achieve more than they think is possible,” said Gov.-elect O’Malley. “It’s been one of the great blessings in my life to have worked with him over these past seven years. I know Jim Smith is going to be very happy he made the decision to hire Peter.”

Government service is a family tradition for Mr. O’Malley, who grew up in Rockville with his five siblings, graduated from The Catholic University of America, Washington, D.C., in 1993 and completed his law degree at the University of Baltimore in 2000.

For nearly 20 years his mother has worked for U.S. Sen. Barbara A. Mikulski, and his father – who died last January – was an assistant U.S. attorney.

All three of Mr. O’Malley’s brothers are attorneys, including his twin brother Paul. The two were born June 29, the feast of Ss. Peter and Paul.

Comparisons to the Kennedy political dynasty have been natural. One could compare the relationship between Robert and John Kennedy during the former’s presidential years to Martin and Peter O’Malley’s time together on the campaign trail and in City Hall.

“Yes, I’ve heard that comparison before,” said Mr. O’Malley as he blushed and sipped his iced tea.
“We’re both Irish Catholics and involved in politics, but that’s about it. The Kennedys have money.”