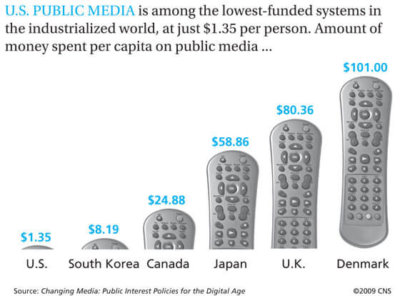 WASHINGTON – According to figures supplied by Free Press, the media-reform think tank and lobby group in Washington, the federal government spends about $1.35 per person per year on public media.

Public media includes virtually all noncommercial TV and radio in the United States and takes in not only PBS for TV and NPR for radio, but also low-power radio and public-access channels on cable TV.

But most federal money doesn’t filter from the Corporation for Public Broadcasting to low-power radio and public-access TV like it does to NPR and PBS. And even the PBS and NPR money is paltry compared to what other nations spend on public media.

There is a notion, and a generally wrong notion at that, that government-funded media is a form of state-sponsored propaganda. More one-sided views can be seen on commercially supported cable TV and talk radio.

What would happen if government spending on public media were to hit the $5-per-person mark – nearly quadruple what is available currently?

For one thing, we’d probably see and hear fewer pledge drives that block out preferred programming in favor of special programming tailored to generate phoned-in pledges.

But with more government funding and less begging, we also would see increased programming budgets. We could see more programming generated from these shores rather than imported from abroad. By the same token, it’s possible that we would see imported programming coming from nations other than Great Britain, as there are plenty of other countries where English is an official language.

More public TV stations would be less at the mercy of reruns. More of them would be able to broadcast around the clock.

But an increase in government funding for public media means that the overwhelming share of public money wouldn’t necessarily have to go to PBS or NPR. There would be nothing wrong with additional public TV or radio services offering shows displaying one part of a diverse America to all of America.

Take for instance the current fears by Catholic-run PBS affiliates that they could lose their affiliation if they continue to air religious programs. Is it possible there could be a public broadcaster who deems it OK for local stations to air religious programs that are of interest to the residents of their broadcast area? It makes sense for a heavily Catholic area like Brownsville, Texas, or New Orleans, or in Salt Lake City, where members of the Church of Jesus Christ of Latter-day Saints are the majority.

It’s even within the realm of reason that religious faiths in the distinct minority in an area, like Mormons in New Orleans or Catholics in Salt Lake City, would benefit if their programs could be shown, if there were no proselytizing or appeals for “love offerings.”

There also would be substantial benefits to the thousands of community-access cable channels if they could improve their facilities and programming with a reliable infusion of government funds. How many city council meetings can one stand to watch if the only image available comes from a single camera mounted on a tripod in the back of the room, zooming in and zooming out?

How much more appealing would the public school district’s cable channel be if it did more than present a slide show of schools in the district, with a soundtrack apparently from a jukebox filled with 1980s oldies and a crawl message on the screen detailing the following week’s cafeteria choices?

In Canada, which has roughly 10 percent of the U.S. population, public media thrives with both AM and FM stations reserved for news, informational and cultural programming for both its English- and French-speaking populations, because it allots $24.88 per person for public media.

CBC, the nation’s own TV network, accepts advertising but manages – despite its own budget squeezes – to present a wide variety of program choices that don’t depend on U.S. imports to be a ratings success. Meanwhile, Ireland spends nearly $60 per person on public media, England $80 and Denmark $100.

Not every supplier of programs to U.S. noncommercial TV and radio stations would want government money for fear of taint. But for those who see more benefits than burdens, they also can see that it’s well past time that Americans are better served throughout the broadcast spectrum.