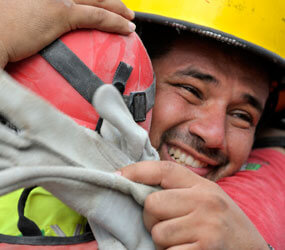 MEXICO CITY – Caritas search and rescue teams miraculously found and pulled a 69-year-old woman from the rubble of the badly damaged Cathedral of Our Lady of the Assumption, where she had been clinging to life for seven days.

Anna Zizi was pulled out by expert teams from Mexico and South Africa who worked for two hours to extract her. Caritas officials said she suffered injuries to her hips and possibly a broken leg, but “was not critically injured.”

Zizi told her rescuers, “I love you,” upon being pulled from the rubble Jan. 19.

Mexican rescue worker Gabriel Romero Vega said trained dogs “signaled that someone was alive in the collapsed building” and that Zizi had been singing to draw the attention of others.

“It was a gigantic surprise,” Romero told Catholic News Service upon returning home Jan. 20 to Cancun. “It’s something that I consider to be a miracle.

“The joy was overwhelming, more than you can imagine,” he added.

Others among the 40 people who worked to pull Zizi from the rubble echoed those sentiments.

“It was like witnessing a small miracle,” said Caritas translator Ruth Schoffl of Austria. “After a week of searching we heard this voice. I was able to speak to her, translating for the rescue team.”

South African relief team leader Ahmed Ham called the rescue “the best thing in the team we have experienced.”

“It is the first time we have saved somebody’s life after such a long time after the quake. The team has got an energy boost anew and we are heading out to do more work as there is still hope,” he said.

Monsignor Charles Benoit, vicar general of the archdiocese, was not among those found alive. His body was found “with his hands around a reliquary with a wafer inside,” Caritas said in a statement.

Alejandro de Hoyos of Caritas in the eastern Mexican state of Quintana Roo – which sponsored the Mexican rescue workers – said Zizi was the fifth person rescued from the cathedral site in the days following the earthquake.

The miracle of finding Zizi alive marked one of the few bright spots since a magnitude 7 earthquake flattened much of Port-au-Prince Jan. 12. Relief efforts have been hampered by damaged infrastructure, security problems and shortages of critical supplies as well as a Jan. 20 magnitude 6.1 aftershock that media reports say caused even more panic in the Haitian capital.

Romero and his Mexican team – known locally as “Gophers” – were among the first wave of foreign rescue workers to arrive in Port-au-Prince Jan. 14. He described the current situation as “improving very, very slowly” although the city still lacked many basic necessities such as food, clean water and medicines.

“The city is paralyzed,” he said. “Violence is latent.”

Another Caritas team of Mexican rescue workers and doctors had already left for Haiti to replace Romero’s team and resupply a clinic established outside the Port-au-Prince cathedral by Mexican Sister Bertha Lopez, mother superior and founder of the Guadalajara-based Missionaries of the Risen Christ.

The Mexican team in Haiti included mostly civil protection workers and firefighters from Cancun and was being replaced by a new team of Gophers – a Mexican term for the workers who formed rescue brigades after a magnitude 8.1 earthquake in Mexico City in 1985.

The rescuers have become famous for digging through rubble to save people trapped in collapsed buildings after disasters such as hurricanes and earthquakes.