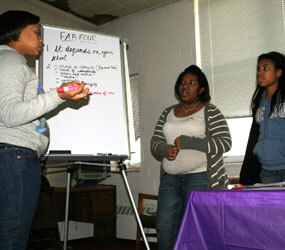 Quincy Lucas of Dover, Del. is a woman on a mission, and seven young people from Baltimore are taking her lead.

If Quincy has her way, domestic violence, which took the life of her sister Dr. Witney Holland Rose, will come to an end once and for all. That end will begin with the Witney’s Lights Youth Ambassador Program, inaugurated this year through a partnership between Witney’s Lights, the organization Quincy founded in 2008 in her sister’s name, and St. Bernardine Church in Baltimore.

Witney was murdered by her ex-boyfriend in January 2003.

“At the end of the trial, the killer was found guilty,” said Quincy’s husband, Kevin Lucas.

Kevin explained Witney’s murderer, after the guilty verdict was read, remarked, “I owned her. She was mine. Everything she had came from me. You’ll never hear her voice again.”

But according to Kevin, “My wife said Witney’s voice would be heard.”

To that end, Quincy founded the nonprofit Witney’s Lights with the goal, said a press release, of “eradicating domestic violence through awareness, education, prevention, advocacy, and a commitment to advancing the initiatives laid out in the landmark Violence Against Women Act of 1994.”

“The program was my wife’s idea,” Kevin said. “There’s something about the connection that youth have to their peer group. Quincy wanted to train a legion of young people to be ambassadors for healthy relationships and leadership skills.”

The 2010 inaugural class of youth ambassadors met for the first time Feb. 20 at St. Bernardine’s for a five-hour day, 10 a.m. to 3 p.m., of team-building, critical thinking, and round-table discussion.

The highlight of the day was an activity titled “Youth as a Catalyst for Peace” during which the participants, all middle- and high-school aged students, split into two teams to consider the reasons for and how to address conflict and violence in their communities and schools. Facilitator Michael Wilson, a member of the Witney’s Lights Board of Directors, asked students, “How can you create a community of peacemakers?”

One of the teams brainstormed it would be more productive to convey to the public what makes a healthy relationship, noting the constant barrage by the media of disfunctional relationship characteristics.

At the close of the Feb. 20 session, Quincy asked participants to identify “a lightbulb moment,” something significant they had learned that day that they could take with them as a way of “lighting the path.”

“My lightbulb moment was that the best way to solve a problem is to make sure it doesn’t happen,” said participant Ashland Tann, who explained his participation in the program stemmed from some events that have happened in his extended family, as well as his desire to take on leadership roles.

Participant Michelle Jenkins said her lightbulb moment came in “realizing that if we want anything to be accomplished, we have to start somewhere. An initiative has to be taken so that we can become leaders for today and pass down a legacy for our leaders of tomorrow. It starts with us now.”

Quincy said participants at the monthly meetings will hear from representatives from both House of Ruth and Turnaround, as well as a life coach and another individual who will discuss mediation, among others.

“Not only are they talking to them, and we’re hoping that it’s interactive, but they’re also connecting with them,” she said. “These are people from their community so that even after the workshop is over, they will have a communication and a contact, should they need something, should they need further advice.”

Kevin and Quincy’s daughter, Victoria, explained her participation in the Youth Ambassador Program. “That was my aunt who was the victim of domestic violence, who the organization is named after, and ever since that, my whole life has been switched upside-down,” said Victoria. “It’s upside-down not in the sense of ‘Oh my gosh! Turmoil! I don’t know what to do!,’ but upside-down in the sense that now I have a driving force behind me to do something to better my community.”