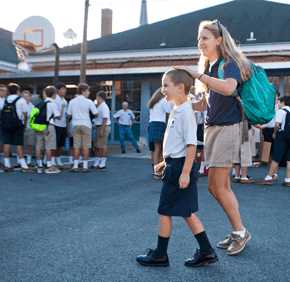 By Maria Wiering
mwiering@CatholicReview.org
ANNAPOLIS – Peter Cardillo sat in the front row of a colorful first-grade classroom at St. Mary’s Elementary School, his grin revealing two lost teeth as he chatted with the boy next to him. The 6-year- old wasn’t nervous for the first day of school at all, he said, only excited to see friends after summer vacation.
Peter is the youngest of Jim and Chyrell Cardillo’s six children, all St. Mary’s Saints. Nina, 17, is a senior; James, 15, a sophomore; and Andrew and John, 11-year-old twins, sixth graders. The Cardillos’ oldest, Anna, is a 2012 graduate studying at Towson University.
The halls of St. Mary’s Elementary and High School were a sea of blue, white, khaki and plaid Aug. 25 as students found classrooms and homerooms, armed with boxes of school supplies.
Nina toted a purple shelf and Pope Francis prayer card for her locker. Chyrell, 49, had walked Peter to his classroom in an adjoining building before going to her office, where she works as the parish database administrator. Andrew and John went to separate classrooms before reconvening in a paved courtyard for the elementary school’s annual first-day outdoor Flagpole Mass.
Getting ready for this school year has been “crazier than usual,” Chyrell said, in part because St. Mary’s launched an iPad program, requiring students in grades six and up to have the devices. Her Sunday to-do list included downloading 22 apps for Andrew and John, filling backpacks and preparing uniforms. She went to bed at midnight and was up at 5 a.m.
For the Cardillos, back-to-school is a process. By opening day, Nina and James had been practicing soccer for two weeks, and all students had visited the campus for orientation. After all the preparation, starting school is a relief, Chyrell said. For her family, St. Mary’s parishioners, the school is a second home.
To view a slideshow, navigate the arrows below.
Most Catholic schools in the Archdiocese of Baltimore are scheduled to open a day later, Aug. 26. Archbishop William E. Lori and Barbara Edmondson, superintendent of schools, expected to spend the day at St. Maria Goretti High School and St. Mary’s Elementary School, both in Hagerstown.
Of the 70 Catholic schools in the archdiocese, only three have kindergartners and seniors on one campus: St. Mary’s, Bishop Walsh School in Cumberland and Our Lady of Mount Carmel School in Essex.

St. Mary’s School in Annapolis. (Tom McCarthy Jr. | CR Staff)
The Cardillos enjoy sharing schools, Nina said. Last year, Peter would try to glimpse Andrew and John playing at recess. Nina kept an eye out for James, then a freshman.
“I’d give him a little wave or give him a little shove,” she said with a smile. “Sometimes we’d be going the same direction to class and I’d walk with him and see what he was up to. If he had a test, I’d pop in and tell him ‘good luck’ before it.”
For Chyrell, having all school-aged children on one campus means knowing their classmates and their families well, and not worrying whether they will find friends or fit in from year to year. She’s preparing to send another daughter to college, but looks forward to 12 more years with school-aged sons.
“This is fun,” she said. “I love having my kids around. … They teach each other a lot.”
Also see:
Catholic school superintendent takes part in ALS ice bucket challenge
Schools collaborate to improve Catholic education
1600 educators gather for schools convocation
PrevNext