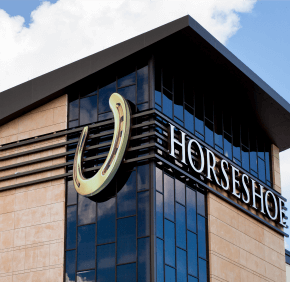 By Maria Wiering
mwiering@CatholicReview.org
Scattered at the foot of a cross, poker chips and Maryland Lottery scratch-off cards joined empty booze bottles, fake joints and fast-food wrappers on a table in St. Ambrose in Park Heights during Lent.
The parish’s liturgy committee called it a “sin circle,” and it represented the “junk that we allow to come into our lives,” said the parish’s pastor, Father Paul Zaborowski, a Capuchin Franciscan.
“People would say it’s like a car accident: You want to go by but you still have to look at it,” he said. “It was so ugly … but people said, thank you for putting this there, because it really did help us to realize the things in our lives that can pull us down and sway us from our focus.”
Father Zaborowski is concerned the Horseshoe Casino Baltimore might join those distractions after its Aug. 26 opening. As the city touts 1,700 new jobs, millions in education funding and an expected economic boost, new billboards advertise hotlines for gambling addiction, a dark side to Horseshoe’s shiny exterior.
A moral gamble?
With a median household income of $35,000, Park Heights is among Baltimore City’s poorest ZIP codes. In 2012, however, it led state lottery ticket sales, with a total of $34 million, according to a Capital News Service analysis.
Father Zaborowski compares gambling spending to alcohol and drug addiction, which plague the neighborhood, he said. Still, parishioners often don’t identify it as a problem, he said, because it’s often in addition to more destructive behavior.
Father Zaborowski doesn’t have a gripe with gambling per se; he plays bingo with his mother when he visits her in Pittsburgh. The problem, he said, is when gambling becomes an addiction and interferes with a person’s responsibilities.
“When you’re taking money that should be feeding your children or housing your child or taking care of your family, that’s when it turns into a sin,” he said.
Glamorization problematic
The $440 million Horseshoe Casino is among five new casinos made possible after Maryland voters passed referenda legalizing slot machine gambling in 2008 and table games in 2012.
Hollywood Casino Perryville opened in 2010, Maryland Live! in Hanover opened in 2012, and Rocky Gap Casino Resort in Flintstone opened in 2013. Ocean Downs, a Berlin race track, added a casino in 2011. MGM National Harbor is expected to open in Prince George’s County in 2016.
In 2008, the Maryland Catholic Conference, representing the bishops, advised against the legalization of slot machines. It repeated its stance in 2012, testifying against gambling’s expansion to table games.
David Cloutier, a moral theologian at Mount St. Mary’s University in Emmitsburg, said to his knowledge, when state bishops’ conferences take a position on gambling, it’s always in opposition.
“That seems significant to me,” he said. “There’s a pretty consistent statement that gambling is a problem.”
He pointed to the Catechism of the Catholic Church, which states, “Games of chance (card games, etc.) or wagers are not in themselves contrary to justice. They become morally unacceptable when they deprive someone of what is necessary to provide for his needs and those of others” (No. 2413).
Games – including those that involve money – are “morally neutral,” Cloutier said, “but that doesn’t mean that it (gambling) is right and anything goes.”
Because gambling can enslave people through addiction, Cloutier said, Catholics should be wary.
“We seem to have a responsibility as a society not to glamorize this activity that is so potentially destructive,” he said.
This glamorization becomes even more problematic when the state derives revenue from gambling, he said, because it means that the more people are addicted to gambling, the more schools or other gambling revenue beneficiaries benefit.
Meanwhile, the poor may suffer more. Studies, including one commissioned in 2010 by Maryland’s Department of Health and Mental Hygiene, show that people with low incomes are at a higher risk for gambling addiction.
“Using casino gambling as an alternative to taxation revenue is essentially taking it from people who don’t have it to spare,” Cloutier said. “Is that their own fault? Well, yes – but the state shouldn’t encourage that and certainly shouldn’t rely on it for (its) own revenue.”
According to Pew Research, 55 percent of Americans don’t see gambling as a moral issue. Of the 40 countries polled on the topic, the U.S. ranked 37th by percentage of population that found gambling unacceptable, at 24 percent. Only France and Canada had more permissive views.
Social impact
In a 2008 background paper on gambling expansion sent to priests, the MCC argued its opposition “isn’t about the morality or immorality of gambling. It’s about the social consequences for families and communities.”
The MCC listed the impact on the lives and families of compulsive gamblers; the increase of crime and decrease in property values in communities with gambling establishments; and the impact on low-income individuals, who gamble at higher rates than people of higher socio-economic status. The MCC argued that generating state revenue in a way that would likely “expand social ills” did not serve the common good.
However, in 2008, the MCC said that on this policy matter, Catholics “may legitimately disagree.”
“If properly controlled, gambling – whether in the form of a community raffle or bingo event, a lottery ticket, racetrack betting or a casino game – can provide legitimate recreation for those who participate responsibly.”
People who gamble, it said, must make “conscientious decisions about their involvement” and “set prudent limits.”

This sign on Baltimore Street in Baltimore City offers the number to a free gambling help line.
(Tom McCarthy Jr. | CR Staff)
Responsible participation
That’s what Denise Stanley does on bus trips she and a friend organize to Atlantic City. She sticks to the penny slots, and only spends what she doesn’t mind losing – about $100 or $150, she said. A parishioner of St. Bernardine in West Baltimore, Stanley said she doesn’t plan to visit the new Horseshoe.
“I am not what you’d call a gambler,” she said, adding that she doesn’t feel drawn to the new casino.
Some people, however, do feel a need to gamble. Last year, the American Psychiatric Association reclassified pathological gambling as an addiction. Maryland Public Television explored the issue in March in a documentary “Understanding Joy: The Devastation of a Gambling Addiction,” which chronicled the aftermath of a Frederick woman’s conviction for embezzlement to feed her gambling habits.
Males, African Americans and other minorities, people under 30, illegal drug users and people with low incomes “are associated with increased odds for being at risk for problem/pathological gambling,” according to the 2010 state survey.
Can’t say no
Higher propensity to gambling may exist in some segments of the population, but gambling addiction can affect anyone, said Lori Rugle, program director at the Maryland Center of Excellence on Problem Gambling. She is quick to establish that from her perspective, gambling addiction is not a moral issue, but a mental health issue.
Gambling addiction, she said, begins in a comparable way to substance addiction.
“It taps into the same neurobiological pleasure centers that alcohol, drugs, chocolate, sex tap into,” she said. “For some individuals who may even have a genetic, biological predisposition, or have a learned or experiential vulnerability, this becomes a preoccupation, and people can develop a tolerance for gambling, just like to substances, needing more and more – either taking bigger and bigger risks, or spending more and more money, or more and more time to get that desired relief, escape or excitement.”
The brain can be “hijacked” by addiction, causing neurocircuitry to change, she said.
“This issue of free will seems to have less and less relevance as somebody goes down that addictive pathway,” Rugle said.
A program of the University of Maryland School of Medicine and the Maryland Council on Problem Gambling, the center does not take on position on gambling itself, but spreads awareness of gambling addiction and provides resources for help. It is funded in part by the state’s gambling revenue.
According to its experts, afflicted gamblers can be addicted to any kind of gambling, including bingo, the stock market and sports betting.
The 2010 survey, conducted before the state’s introduction of slot machines, found that about 150,000 Marylanders experience problem and pathological gambling, a “relatively high rate,” according to the survey’s analysis. It forecasted the rate to increase – perhaps a much as four times – with the increase of gambling accessibility, and “active measures may be required to achieve stabilization.”
Already, scores of Marylanders have entered the state’s voluntary self-exclusion program, which implements gambling deterrents. Gamblers Anonymous holds meetings in 17 locations around the state.
Risk and reward
Maryland’s new and expanded casinos are positioned to bring more jobs and a new funding source for education, as well as funding for problem gambling resources. However, some experts, pointing to economically waning Atlantic City, have questioned whether gambling revenue is sustainable, or if Maryland’s new casinos will boom and bust as new gambling opportunities rise elsewhere.
Jane Buccheri, a parishioner of Transfiguration Catholic Community in Pigtown, said “everybody is in a wait-and-see” mode as Horseshoe opens. So far, her biggest concern is snarled traffic, but she is skeptical it will be an economic boost for her neighborhood.
“It’s hard to tell until they get up and running,” she said.
For all of Father Zaborowski’s concerns, he’s the first to admit that gambling proceeds have benefitted his parish. Parishioners with big winnings have donated to the church, and the neighborhood, which is near Pimlico Race Course, receives development funds from slots revenue.
Across town, Holy Rosary was among Baltimore-area beneficiaries of Bernadette Gietka, a recently deceased parishioner who won a $183 million Mega Millions jackpot in 2003. Across the Archdiocese of Baltimore, parishes and Catholic organizations rely on regular bingo nights to fund operations or charities.
Francis Merkle, a parishioner of St. Michael, Overlea, co-manages “Monday Knight Bingo” for the Knights of Columbus Cardinal Gibbons Council No. 2521in Perry Hall. The weekly event is his council’s biggest fundraiser, and draws in members of Baltimore’s “bingo world” – people who play as often as daily on a bingo hall circuit.
Each game night generates about $1,500 for the Knights programs or projects, Merkle said.
However, he acknowledged, “We really can’t stop anybody from abusing it.”
Missionary of St. Paul Father Augustine Inwang, pastor of Transfiguration, said he has some concerns about the new casino, but right now the biggest problem is traffic. His parish, the closest to Horseshoe, plans to make its presence known to casino-goers in hopes they come to Mass.
He added – with a laugh – they’re also welcome to donate some of their winnings.
Worried you or a loved one has a gambling addiction?
Call the Maryland Center of Excellence on Problem Gambling’s 24-hour helpline at 1-800-522-4700 or visit mdproblemgambling.com.
Also see:
With senior, first grader and three in between, St. Mary’s family starts of the school year
Archbishop Lori, interfaith leaders pray for peace in Iraq
PrevNext